CARLOW manager, Tom Mullally, was a happy man last Sunday. He came looking for a result and while the performance wasn’t perfect his side picked up two league points. He couldn’t have asked for more.

“At the end of the day we had three weeks preparation. Three weeks together. There were questions there which we were unsure of in relation to attitude, touch, striking, how organised we are. You see games yesterday evening throughout the country that have different levels of performance but we are quite happy today to get the two points,” he said. 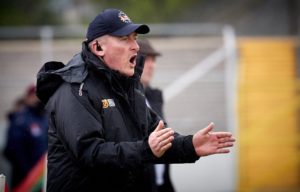 New Carlow manager Tom Mullally got off to a winning start
Photo: michaelorourkephotography.ie

Carlow had to make a change just before the off. In the second last drill before they took their positions, starting midfielder, Ciaran Whelan suffered a serious leg injury and was subsequently taken to Waterford Hospital by ambulance. James Doyle replaced him. Later in the game Carlow brought on five substitutes.

“With the first seventy minutes I don’t think everybody was going to be 100% fit. It was important, where possible, to get players in. We were practical and fair to everybody. Ciaran was a big loss. We were looking forward to seeing his performance today. He had been going well in training for us.”

For the first game of the campaign it was a case of asking players to adapt after a limited training program.

“We have had a couple of injuries and nothing that can’t be sorted over time. Obviously with the first three weeks back, they have been training on their own so they can start making contact. We will get there.”

Now it is a long trip up North to Ballycran GAA grounds on Sunday to take on a Down team who were beaten in Tralee by Kerry last week.

“It is never easy for any team going to Down. Our focus is Down now and we do know Down have targeted this game. It is the second game. None of these performances are going to be perfect. We have to be very realistic about it. We have to deal with what is happening on any given day.”

The game on Sunday throws in at 1pm and will be streamed live on PaircTv.