Two Carlow teams travelled to Waterford today looking to start their seasons with wins and both the Niall Carew’s footballers and the camogie team came away with the precious two points.

In Division 4 South of the Allianz Football League, Carlow played with a wind in the first half in Dungarvan and showed a good appetite for attacking football and would have been further ahead at half time than 0-9 to 0-5 but Conor Crowley’s goal was disallowed for a square ball.

Carew’s side upped their performance again in the second half and were rewarded when Jamie Clarke rounded off a sweeping move with a sweet finish. Substitute Colm Hulton made sure of the win with Carlow’s second goal of the game with ten minutes to goal and then Crowley rounded off the win with an injury time goal to leave Carlow 3-16 to 0-10. It leaves Carlow in a strong position going into a home game against Wexford in two weeks when a draw would be enough to guarantee Carlow a place in the League semi-final. 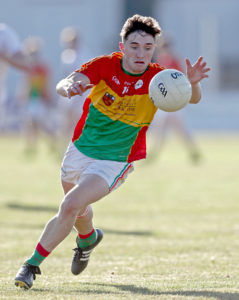 Conor Crowley was among the goals for Carlow in Dungarvan this evening
Photo: ©INPHO/Laszlo Geczo

Earlier in the afternoon, Carlow’s camogie team recorded a 1-15 to 0-8 in the Littlewoods Division 3 in Kill GAA Club.

Eleanor Tracey finished the game as top scorer with eight points and her frees helped Carlow into a 0-9 to 0-2 half time lead, they extended that to 0-13 to 0-5 by the water break and Ali Cushen’s injury time goal completed a fine win.