A pulsating and entertaining game in Ballycran but ultimately, a disappointing result for a Carlow team who played over half the game with 14 men. 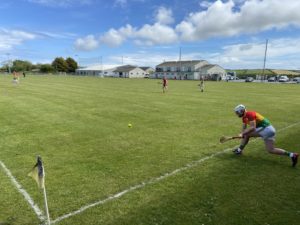 Tom Mullally’s men made a dream start when Chris Nolan scored a goal from close range inside the opening 30 seconds and Carlow led 1-5 to 0-1 after 10 minutes.

Down were the better side in the remainder of the opening half and their cause was helped when Carlow full back was adjudged to have cynically fouled Eoghan Sands in the 30th minute and Conor Woods converted the penalty to help Down into a 1-12 to 1-10 lead.

Just as Doyle was preparing to return from the sinbin early in the second half, James Doyle was shown a straight red card for a swipe across the legs of Jordan Doran.

Despite being a man down, Carlow kept battling and went ahead in the 49th minute when John Michael Nolan found the net after excellent approach play by Gary Lawlor, 2-14 to 1-16. However, crucially, in the couple of minutes of play before the water break Down scored 1-1 to go back into the lead.

Down stretched that lead to six points in the final quarter and seemed to be cruising home, especially as Carlow lost key men John Michael Nolan and Marty Kavanagh to injury.

But Carlow kept pushing and they were awarded a penalty themselves in the 70th minute when Liam Savage dragged down Tony Lawlor and was sent to the sin bin. Chris Nolan’s penalty was saved but Kevin McDonald reacted quickest to score the rebound.

Jack McCullagh then pointed for Carlow to leave just two points in it in injury time and McCullagh had a great chance to snatch a win for Carlow late on but his low shot was superbly saved by Stephen Keith.

Full report, reaction, photos and analysis of the game in Tuesday’s paper.