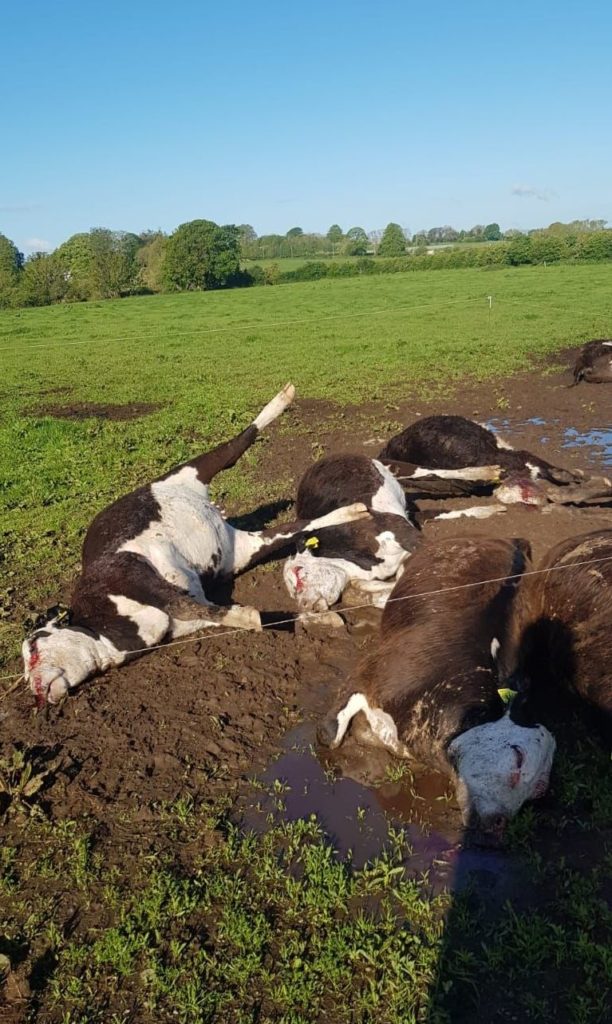 EIGHT cattle were killed following a ferocious lightning strike on a Co Carlow farm at the weekend. The livestock tragically perished when a horrific thunderstorm struck on Saturday afternoon and killed them instantly at the farm located outside Tullow.

“It’s shocking … you’d be absolutely sickened to your stomach to see them there, all bundled together dead,” said the local farmer, who did not wish to be named. “They fell exactly where they were … it was terrible.”

The livestock were weanling calves, approximately eight months’ old, that had been reared over the winter and put out to grass just five weeks ago.

“My mother and brother were sitting at home and a terrible thunderstorm started on Saturday afternoon, the rain was lashing down and then my brother heard a bang and a crack of lightning, which he thought had come off the shed.

“When we went out after, we saw the cattle all dead … eight of them,” he said.

“Luckily, it’s not yourself or someone else. I suppose it’s bad, but it could have been even worse.”

Lightning strikes are rare events. However, every year in Ireland livestock is lost to powerful bolts of lightning.

Livestock can be hit and killed directly by the lightning bolt or by the electricity travelling through the ground around the strike. One lightning bolt can kill multiple cattle depending on their proximity, with the massive high voltage of electricity instantly stopping their hearts and neurological functions.

In fact, a number of cattle were killed in multiple incidents involving lightning over last weekend’s stormy weather, with a similar tragedy occurring in Westmeath.

Farm insurance can cover against the loss of livestock or damage to property caused by natural disasters or similar ‘acts of God’. However, it is undoubtedly a deeply upsetting incident for farming families.