Newport in strong position after first leg of play-off

NEWPORT County put themselves in a strong position in the League 2 play-offs with 2-0 win in the first leg against Forest Green Rovers last night.

Playing in front of a crowd of 900, the first time spectators have been allowed in the club’s home ground Rodney Parade for over a year, Padraig Amond’s team dominated the game and could perhaps have been even further ahead by the final whistle. 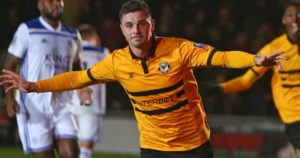 For supporters who have waited so long to cheer one of their team’s goals they certainly got one to remember when defender Matthew Dolan lashed one into the top corner from fully 30 yards in the 31st minute.

Lewis Collins scored the second six minutes into the second.

Amond was in the thick of the action throughout the game and his experience was crucial in Newport securing such an important win before he was replaced in the 90th minute by Nicky Maynard.

The second leg at The New Lawn, Forest Green Rovers’ home ground, kicks off at 6.30pm on Sunday 23 May and is live on Sky Sports. By the time that game kicks off, the second leg of the other semi-final between Tranmere and Morecambe should be completed so Newport will know their potential final opponents before their game begins.