Bolger has Guineas double in his sights

CARLOW trainer Jim Bolger is targeting a Guineas double at the first Classic of the Irish flat season at the Curragh on Saturday.

Poetic Flare, with veteran jockey Kevin Manning on board, won the English 2000 Guineas at Newmarket last month and he will renew his rivalry on Saturday with the horse that came third in that race, Jessica Harrington’s Lucky Vega. 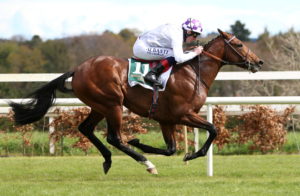 Poetic Flare and Kevin Manning are looking for more Classic success for trainer Jim Bolger at the Curragh on Saturday
Photo: ©INPHO/Peter Mooney

Bolger spoke to Fran Berry for HRI recently to reaffirm how much confidence he has in the horse.

“From day one we had him marked out as a very nice horse. He kept improving all the way along. I felt going to Newmarket that he was as good as any three year old that has left here by June time, he was up to that standard. I wasn’t surprised that he won but I was a little relieved after the photo finish was announced. It’s a great race to win and it was very welcome because we haven’t had a really top horse for three or four years. To keep the show on the road I need one of those every few years,” said Bolger.

The horse has a special meaning for Bolger as he is named in honour of his daughter, Fiona.

“She’s a poet and a writer and we thought we’d honour her with the name. I’m glad that he was up to Classic standard because she certainly is,” he said.

Manning will once again partner Poetic Flare, while Shane Foley rides Lucky Vega. Bolger also has a second runner in the race, Rory Cleary will be on board Mac Swiney.

It’s the 100th running of the Tattersalls 2000 Guineas and it is shaping up to be a high class affair. Aidan O’Brien is strong handed as usual. Ryan Moore has picked Wembley, Wayne Lordan is on Battleground and Seamie Heffernan will be on Van Gogh.

Charlie Appleby’s La Barrosa leads with the English challenge, with The Rosstafarian, trained by Hugo Palmer, also making the trip across the water.

Veteran trainer Kevin Prendergast would be a popular winner if he could land the €400,000 contest with Monaasib having previously tasted success with Awtaad and Northern Treasure. Donnacha O’Brien, Joseph Murphy and Andy Slattery will look for their first Classic race success with Emporio, Agrimony and Rebel Step respectively.

The race goes to post at 3.20pm and is part of a high class seven race card. The 1000 Guineas follows on Sunday.