Council urged to take a hard line on Tullow warehouse 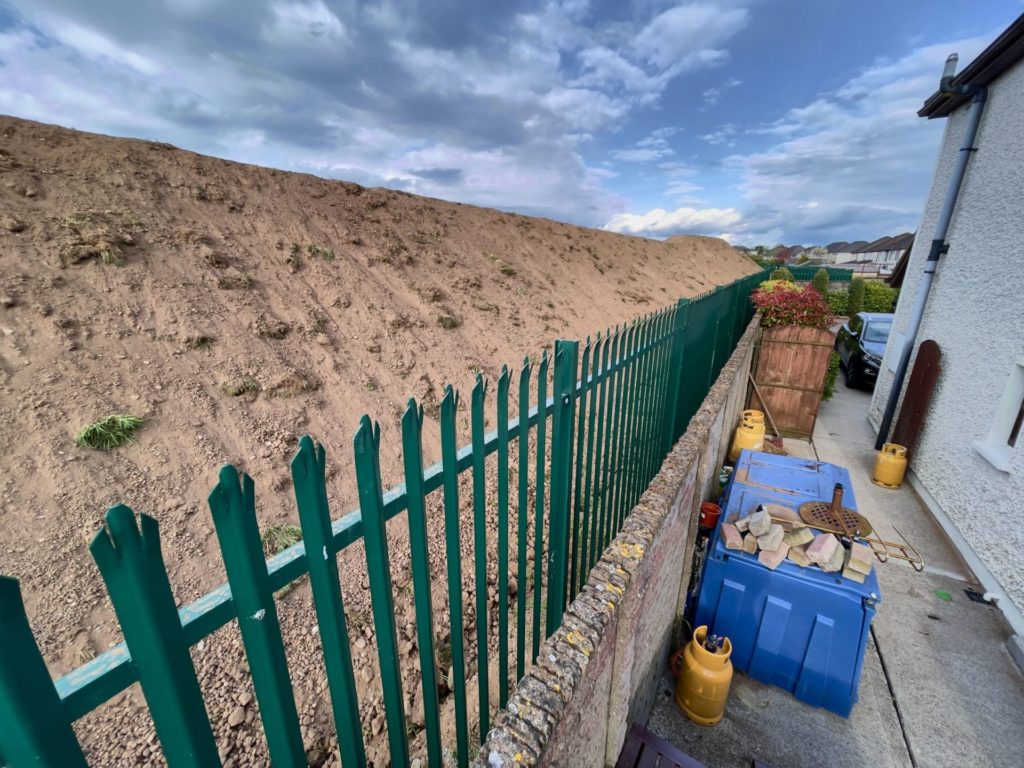 THE council was urged to ‘rule with an iron fist’ when it comes to rigorously enforcing the planning laws, as concerns over the development of a massive warehouse in Tullow escalated last week.

Carlow Warehousing Ltd, owned by Ned Nolan, has been served with two enforcement orders by Carlow Co Council, demanding that the company removes a mound of clay, known as a ‘berm’, that surrounds The Links housing estate in Tullow, as well as spike-topped railings. The council insists both the ‘berm’ and the style of fence chosen are in breach of the planning permission granted to Carlow Warehousing Ltd by An Bord Pleanála in October 2020.

The matter was raised by cllr Brian O’Donoghue at last week’s online meeting of Carlow Co Council, despite repeated attempts by the council executive to shut the discussion down. The executive insisted that a live planning matter could not be discussed or commented on, but cllr O’Donoghue was adamant that, under standing orders, members are entitled to use their full speaking time of five minutes to “raise an important matter”.

Cathaoirleach Tom O’Neill allowed the discussion, but timed the five minutes allotted and then, on several occasions when it had elapsed, attempted to end cllr O’Donoghue’s prepared statement on the matter. Undeterred, cllr O’Donoghue continued.

Cllr O’Donoghue called on the council executive to fully accept that enforcement is an essential part of the planning process and to confirm that they would pursue enforcement to the letter of the law “no matter who or what”. He then, at length, outlined the background to Carlow Warehousing Ltd’s application for planning to construct a warehouse of almost 33,000 square metres at Tullowbeg, Tullow.

The warehouse will act as a storage unit for international retailer Smyths Toys, promising 100 jobs and additional employment during the construction phase.

Cllr O’Donoghue stated that, from the outset, he had concerns about the development and the fact that “this monstrosity was being shoved down our throats”. He stated his belief that residents of The Links, Tullow were “sold a pup” and spoke passionately about the situation they now face with this “horrific” fence and the berm directly behind their homes.

Cllr O’Donoghue stated that the residents did not object to the jobs that the development would bring, but were adamant that the two enforcement orders issued by the council “must be followed”.

He encouraged a strong, united approach from the council that this “would not be tolerated” and stressed that council officials must “rule with an iron fist”. Cllr O’Donoghue also urged the developer to remove the fence and fully comply with the enforcement and asked any council members with a direct line of communication to the developer to “urge him to comply”.

Director of services Michael Rainey stated that he could confirm that enforcement was an essential function of the planning process, but added it was “not possible or appropriate to speak on a matter when notice has been served”.

Cllr Charlie Murphy stated that he was not asking for any participation from the council executive, but “matters were out in the public domain”. He continued that there had “not been a block on a block yet and already there seems to be two breaches of planning”. Cllr Murphy reflected that, in his opinion, it now looked like “Carlow Co Council should damn this application out of hand”.

A clearly uncomfortable Mr Rainey again stressed that members “really should not be discussing this at all”.

Cllr John McDonald then confirmed that “there is a line of communication open with the developer”, adding: “Leave us to do our work, if possible.”

A concerned cllr Andrea Dalton expressed her objections to the content of the discussion, adding that a “dangerous precedent had been set”, where members were allowed to “rehash planning decisions at a council meeting”. She stated that irrespective of this or any other particular case, or indeed its merits, “there is a reason why councillors are outside the planning process” and insisted that “procedures needed to be followed”.

“It’s disgraceful what happened today and the blurring of the lines with the council executive, and I don’t think it should be allowed at a council meeting,” she stated.