CARLOW manager, David O’Mahony, praised his players and admitted he could not be anything but content with this result after his team started their Littlewoods Ireland Camogie League Division 3 campaign with an away win in Waterford. A win on the road and a comprehensive victory is all he could have asked for.

“Overall, it is good to get the win. We created a few goal chances and had a goal disallowed. The first ten minutes we had those two goal chances and if we had taken those we would have been a little bit more comfortable. We didn’t concede any goal chances which we would be happy with. I never felt we were opened up at any stage. The girls worked really hard. It was a good performance,” he said. 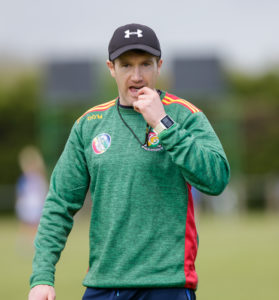 In times past, Ciara Quirke would have been the score getter. This time she only scored one point from play but her contribution was immense and others played off her.

“We had a huge range in scores. We made three changes in the forwards towards the end of the game and we got 1-2 from those. That is a huge positive. The six forwards played well but we actually have a bench. The scoring is not depending on one or two players. We have a good spread,” acknowledged O’Mahony. He didn’t forget players operating in other areas of the pitch. Particularly the defence.

“They were very assured throughout. They never looked like conceding goals and were very comfortable on the ball. They are good ball players and that is a real positive.”

O’Mahony and his team now turn their attentions to following that up with a home win against Limerick in Netwatch Cullen Park on Saturday at 2pm. Limerick beat Clare at home last week, 2-16 to 2-10, so Carlow know they will be in for a tough game but will be hopeful of emergin with a positive result.

The game will be streamed live on the Carlow camogie YouTube page, keep an eye on on the Carlow Camogie Twitter for more details closer to the game.