CARLOW senior football captain, Aoibhinn Gilmartin, has said she was surprised but delighted when Minister of State for Sport, Jack Chambers, announced he was going to provide female gaelic football intercounty players with the same financial support their male counterparts receive. 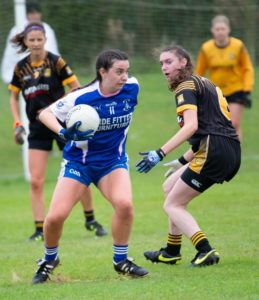 “No! Definitely, I never thought they would go from one third of the amount to what it is now. They tripled it. I thought it would be a slow build-up over the next five to ten years. This announcement was absolutely brilliant,” she said, as Carlow prepare to opening their Division 4B league campaign to Offaly at IT Carlow on Sunday.

“One of our own players, Maria Kinsella, is quite involved with the PGA and lobbying for us to be on the same level. In 2021 there is no reason why men and women should not be the same and treated the same. It is great the move has been made but I never thought it would be done so quickly.”

“I think in the last ten years there has been a lot of development and there has been more exposure of the games. The standard is improving and the general public is a lot more interested in women’s football than ten years ago. The funding does make sense when you think about it that way.

With the achievements Katie Taylor, the Irish hockey team and Rachael Blackmore stimulating public interest the profile of Irish women in sport has never been as high.

“They are an inspiration for all female athletes and very inspiring to see what so many women are achieving. It has been a great few years for women’s sport in Ireland,” agreed Aoibhinn.

Last Thursday the Carlow captain and her team were getting ready for an on-line discussion on nutrition in sport. It is a new aspect to training which Aoibhinn hadn’t experienced before. She is totally behind the direction this part of preparation is taking and agrees it isn’t hard to motivate themselves and each other now. Every new idea is being lapped up by the players who are enjoying a new lease of life as the danger of the Covid epidemic recedes a little.

“It has been brilliant since we got back. All has gone well and we are full of energy after the restrictions were eased. We are all getting the best out of each other,” she says.

Now they have a tricky league match against Offaly who they drew with last year. With only three teams in the group, one win could be enough to ensure a semi-final place against either Leitrim, Louth, Derry or Antrim who are in the opposite group. Aoibhinn is also aware, that in comparison to last year, the league and championship games will come one after the other in 2021.

“Winning the first game and taking the pressure off ourselves. It would also be laying down a marker for the championship. The league used to be in January and February so that was change this year. We don’t have the same gap between the league and championship.”

Looking further ahead, Carlow are part of the five team group in the TG4 All-Ireland Junior Championship along with Antrim, Derry, Wicklow and Limerick. Four teams will progress to the semi-final.