CARLOW had to settle for a draw against Limerick in their Littlewoods Ireland Divison 3 League encounter in Netwatch Cullen Park today.

The visitors had some very good spells throughout the game but Carlow were generally the better side through the second half and although a draw was probably a fair result over the full course of the game, Carlow will perhaps feel that they could have snatched a win in the final minutes. 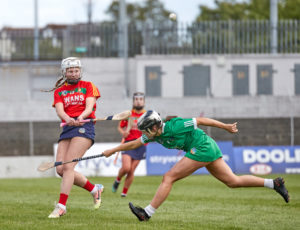 Limerick started the game superbly but Carlow’s only two proper attacks in the opening ten minutes ended with goals, one a superb strike from Ciara Quirke after Eleanor Treacy and Eve Sinnott combined to set her up and then a slightly fortuitous effort from Sinnott, to put the home team 2-0 to 0-4 ahead.

Carlow grew into the game after those goals and Rachel Sawyer put them 2-3 to 0-6 ahead with a brilliant individual effort just before the water break. That break came at the wrong time for Carlow, it completely ruined their momentum and Waterford scored 1-5 without reply once the game resumed, Michelle Curtin with three of those points and the goal coming from Ciara English.

Importantly, Carlow responded to that and finished the half with three unanswered points from the brilliant Eleanor Treacy to go in 1-11 to 2-6 behind.

Treacy scored the first two points of the second half and by the time she converted a 40th minute penalty, to bring her tally from dead balls to 1-7, Carlow led 3-8 to 1-12.

The game was up for grabs in the final quarter and a third point from second half substitute Ellannah Mulcahy put Limerick one ahead before a long range effort from Sinnott tied the game going into injury time.

There were attacks at both ends of the pitch in the time added on and on a couple of occasions the final pass just let Carlow down but still, both sides were satisfied with the result.

Elsewhere, Clare beat Waterford by 3-11 to 1-9 so Carlow need to avoid defeat when they host Clare next Saturday if they are to qualify for the semi-finals.