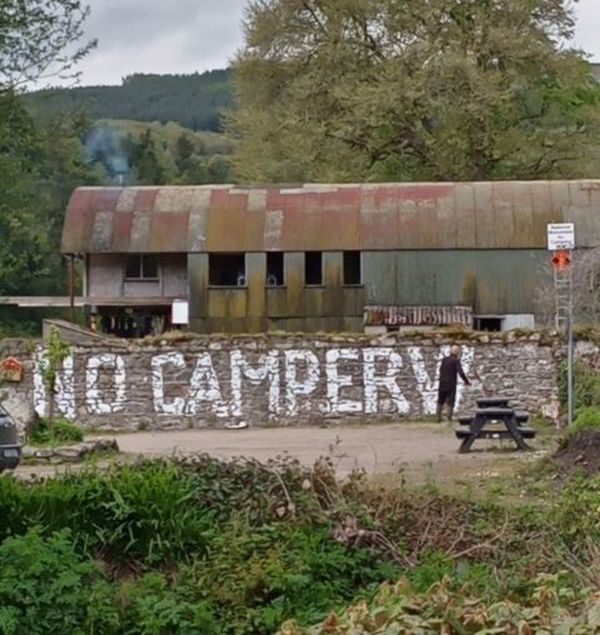 A MESSAGE daubed on the wall of a St Mullins car park raised eyebrows and a kerfuffle last week.

‘No Campervans’ was painted on the wall of a car park at the Quay, St Mullins the weekend before last.

The car park, which is owned by Waterways Ireland, has seen camper vans using it as an overnight stop. A St Mullins resident put the sign up, but days later removed it following local disquiet.

A photo of the sign being put up was taken and circulated locally.

The Nationalist contacted the resident, who declined to comment about why he put up the sign, but accepted responsibility for doing so.

It’s understood there has been a background of simmering tension between the resident and campervan visitors in recent years.

Martin O’Brien of the neighbouring Mullicháin Café said: “(the sign) went down bad, but it’s been rectified. It was a silly thing to do.”

Mr O’Brien said that with other camping grounds closed there had been nowhere locally for campervan drivers to go at night.

“You could have five or six in a week, but next week there could be none. The Hub in Graignamanagh is closed, as are other camping spots. The only place locally for campervans to come is St Mullins. It’s a phenomenon for right now; once the fourth of June comes around, all these places will be allowed to open again,” said Mr O’Brien.

Waterways Ireland would not comment on the specific incident. However, the body said, in a statement, all recreational users were welcomed to waterways.

“Recreational users with campers vans, like all other users, are requested to must comply with the byelaws, the Canals Act 1986, park responsibly and leave the place as they find it.”