CARLOW football manager Niall Carew is facing up to changing a third of his starting line up after five players who started the win last time out against Waterford were declared unavailable for Saturday’s game against Wexford. 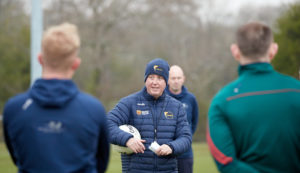 Ross Dunphy injured his ankle and he will have a scan tomorrow the severity of that injury. Mark Furey was forced out of that win over Waterford in the first half and he is one of three players who miss out due to a hamstring injury, along with Daragh O’Brien and Conor Lawlor. Conor Crowley scored a late goal in that game but he will also miss Saturday’s match.

That means that Carew has to plan without three of this starting forwards and two defenders.

The loss of those players is offset by the return of Jordan Morrissey and Sean Bambrick who are likely to feature at some stage of the game. Carew will finalise his team after training tomorrow evening.

Carlow have one foot and four toes in a League semi-final after Waterford defeated Wexford last weekend. Only a defeat of over 30 points will deny Carlow a place in the semi-final but the team are very much focussed on notching up another win and continuing strong momentum through the League and into the Championship.