LAST Sunday’s League 2 promotion play-off game against Forest Green Rovers was one of the most intense and exciting games I’ve been involved in and I’m just so glad that we found a way to win, even though we lost on the night, and are now on the way to Wembley again for the promotion final against Morecambe. 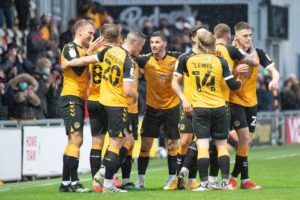 We put ourselves in a good position by winning 2-0 in the first leg at home in front of our fans last Tuesday but then found ourselves 2-0 down after eight minutes, and then 3-0 down early in the second half, on Sunday. Kevin Ellison scored a wonder goal to spark us into life and then we scored again to go ahead on aggregate before their fourth goal sent the game to extra time. I was off the pitch by then and it wasn’t nice to watch from the sidelines, it looked like the game was going to a penalty shoot-out but Nicky Maynard scored a 119th minute winning goal to spark amazing celebrations for us.

It was a great advertisement for play-off football. All the games this week in the play-offs have been the same really, very few have not been exciting games. It’s just nuts. It’s genuinely hard to explain how mad it was to watch.

We had the little kick in the backside on Saturday when Sunderland went from 2-0 down to 2-2 but it can be hard to get your head around things in play-off football. We were 2-0 down but were still level in the tie and it’s hard to get your head around that. We came back from that but then they went 3-0 up and we’re thinking it’s not meant to be. Then, the second half just turned crazy, I don’t think I’ve been involved in a game like it. My fingers are genuinely sore from biting my nails as I looking on.

We scored some brilliant goals over the two games. Mattie Dolan scored a wonder strike in the first leg, it was a goal that deserved fans, it was a strike that dreams are made of. Kev’s goal in the second leg was just brilliant and to be still doing that at 42 years of age shows what he is made of. He is brilliant for us off the pitch as well and knows his role in the squad, it’s just an inspiration to see him doing what he is doing, it’s brilliant to have him here and be his team-mate. When lads are in and out of the team it’s hard to keep control of your emotions but whether he is playing or not he’s brilliant in the dressing room. He just sums us up as a squad.

It’s brilliant to be be going back to Wembley, we had the disappointment two years ago in the final there against Tranmere Rovers so I really hope this is our time. I’m sure Morecambe would say the same but I think after everything we have been through as a club and squad we deserve it.

The fact that our home pitch was so bad for an eight week period over Christmas and the new year, we played on it when it was really bad and then played some of our home games at a different venue. It’s all ifs, ands and buts but I really think if our home pitch had been in a good condition all season we would have been automatically promoted.

It’s great to be going back to Wembley and to be playing in front of fans there, even if it is only 10,000, with 4,000 from each club. It’s a pity that tickets are so tight and that people from home won’t be able to come over and see the game, I think half of Carlow was at Wembley when we played Tranmere two years ago! I have to be honest though, as much as I would love mine and Caoimhe’s family and friends to be at the game, sorting out tickets in the week leading up to the game is a headache I’m glad I won’t have. The big positive, though, is that my little boy’s first game is going to be at Wembley, which is mad. Caoimhe is really looking forward to bringing him to the game, Eóghan is still a bit young to know what’s going on but he loved bouncing around when his daddy was on television and he had a little extra half an hour before going to bed to watch some of the game.

We’ve been there and had the whole occasion of going to Wembley but this time it’s all about winning. We had the hurt of losing there and we don’t want to go through all that again. Last time, I got married a week later thankfully because if it wasn’t for that excitement my summer would have been ruined. We’re desperate to be promoted. It’s a great place to play but it’s a horrible place to lose a final. I’ve lost two finals there and it’s a lonely, lonely place when you lose. I grew up watching my idols walking up the steps to lift trophies there and that’s what you dream of, granted it was the FA Cup that I was dreaming of but that doesn’t matter because the excitement is still there and it’s brilliant to have that to look forward to.

There’s usually a two week break between the semi-final and final but thankfully this year there’s only a week between then and the game is on Monday afternoon (3pm Monday 31 May, live on Sky Sports). It’s a Bank Holiday over here but not back at home but I’m sure there will be some people taking a half day from work to watch it. I have one friend who is a teacher who has already told me that their class will be spending that afternoon watching the television!

I am due to go home in a couple of weeks depending on how things are but I had to text mine and Caoimhe’s family to apologise because it was going to be an extra week before we get home. They are still waiting to meet their grandson for the first time after over a year but I think it they understand.

Every year squads break up at the season and you never know what will happen during pre-season but I think it’s fitting that this squad has got to Wembley and whatever happens now with players, we’ve had a really good group of lads. Team spirit can bring you a long way and I just hope now that it can get us through one more game.