THE recent announcement that Julian Bradley has been selected for the Irish Davis Cup, which will be taking place in Cyprus, has probably gone over the heads of most people locally. Yet the Irish international tennis player is very much a successful Carlow sports story which has been travelling under the radar for many years now.

Living in Connecticut, the Carlow sports star currently has a singles ranking of 930 with the Association of Tennis Players (ATP) while his International Tennis Federation (ITF) ranking is 622. He went as low as 869 and 603 respectively with the two bodies. However, he has had a lot of doubles success with a number of different players and he and a friend, Jack Findel Hawkins, won the 2019 Irish Open Doubles title. 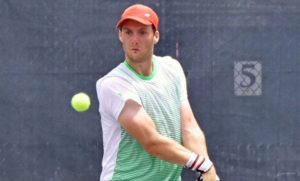 Now the US based tennis player will join Simon Carr, Osgar O hOisin and David O’Hare on the Irish Davis Cup team against opposition in two pools decided from entries from Ireland, Cyprus, Luxembourg, Monaca, Georgia, Iceland and Malta.

His story is a fascinating one. He played all the usual sports a young fella does in school. He was in the Gaelscoil but went to Clongowes after national school.

“I played hurling in Carlow Town Hurling Club, gaelic with Éire Óg, played a bit of rugby, soccer in New Oak. I was doing all the team stuff and got into tennis as I got older. I didn’t have the continuity of team sports. I couldn’t keep up the practices and I felt I was missing out. I wasn’t getting as good as the other guys. I played intercounty but I wasn’t improving at the same rate as other players,” he recalls.

The sport of tennis really suited him. His friends included brothers, Cormac and Fiach O’Toole, in Carlow. He credits the encouragement he received from the O’Toole parents, Jimmy and Carmel for giving him the desire to play tennis in Carlow initially.

“I started tennis in boarding school and I was very good friends with their children. They used to bring me around to tournaments. I spent a lot of summers in their house and that is how I got into it. I actually started very late,” Julian recalled.

“I owe the O’Tooles an awful lot. They were very encouraging. Even when they took a back seat, they were always interested and were kind of shocked how much I kept going with it.

He also credits Carlow tennis coach, Paul Quinn, who gave him a lot of help and encouragement in his early years. The two are still close and contact each other from time to time.

“Paul is shocked and sends me a message saying he never guessed that I would keep going. I loved it. It was great.”

His parents, Chris and Barbara, still live in Carlow and when he was home two years ago, he played a number of domestic tournaments while he also carried out a number of tennis clinics in the Carlow club.

Recalling his secondary school years he spent a lot of time playing tennis in Dublin and around the country. After leaving school he studied Dentistry in Trinity College but the tennis bug was biting and he knew he was good enough to play abroad. He received a tennis scholarship which was based in Florida so after just over two years he parked his third level studies.

He became a touring pro playing in events in America, Mexico, Canada, Great Britain and a number of other countries. He had a fair level of success and won eight doubles tournaments on the circuit.

He says he would never have made it in the United States without the help of tennis coach, Joe Dwyer who, he says, looked after him like a father.

“Joe lived in America for forty years. He coached a lot of players over here and I stayed with him for a while. He has moved back to Dublin now. He was living in Atlanta. I slept on his floor and he coached a ton of good players. He was really good to me,” says the Carlow player.

Another tennis player, Conor Taylor, also advised and mentored Bradley in his early days on tour and for this the tour pro is eternally grateful.

When he was home Bradley played the Irish circuit picking up prize money in tournaments around the country.

“There were so many years I was away from college and when I came back I used to play domestic tournaments for money. There is decent money to be made in events such as the East of Ireland and the Irish Close while events in the Lansdowne, Bray and Naas clubs were also attractive.

When he played in the Carlow Open Week a few years ago it was more about trying to promote the club rather than a money making exercise.

Now the pandemic has given him time to reassess where he is now. He could be heading back to Ireland on a more permanent basis.

“When Covid hit I didn’t really have anything. I had no money actually. I had a little. One guy helped me out and I took a job working a little bit in Connecticut. I was training at the same time and have been living in Connecticut after being based in Atlanta for a spell,” he said.

Finishing his studies at Trinity is in his plans now. That doesn’t mean he will shelve his tennis career but America could be in the past shortly.

“Covid made me take a step backwards. You are always going from week to week. Then when everything stopped you ask yourself what do you want out of this sport. What did I want when I started?”

He answers that question himself.

“I feel you have to set the ceiling high or you are never happy with where you are going. Ok you say, I got to here but it is not what I thought it would be. You want to get to another place in the hopes it will be what you want it to be.”

He reflects on the journey he travelled. He is 28 years of age now.

“Do you know what? If someone told me I would have done this and this when I was fifteen I would have laughed. I think I am very happy and am getting the same feeling when that I really enjoy from tennis when I was playing domestic tournaments.”

As much as he likes the tennis he has come to the realisation he cannot do it forever.

He got most satisfaction when he won a double tournament in Canada in 2018. He is looking forward to the Davis Cup now. His win-loss ratio is 4/1 at the moment. He is still one of the best tennis players in Ireland and he is set to mix his studies with a tennis career on the Irish circuit.

“I think it is time to do something that is for the next seventy years rather than the next ten. Even if I kept going my goal would be to play in a Grand Slam tournament but I would probably have to stay out there for the next three to five years to really get that.

“Do I want to stay out here for the next three to five years? I am happy with what I have done.

“I could be in Carlow in September,” he forecasts.