Can’t be bought. Can’t be taught. You either have or you don’t and this evening in Netwatch Carlow Cullen Park Carlow showed that they have it in abundance. 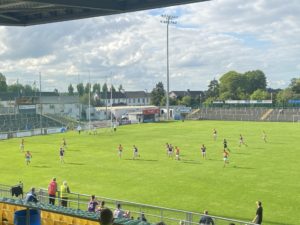 So many things went against a Carlow team who were without five players who started their previous win over Waterford that it would have been easy for heads to drop. The result meant little to Carlow in terms of the League, only a big Wexford win would have prevented them from finishing top of their group, but they fought to the very end and eventually snatched the win thanks to points from John Murphy and Darragh Foley deep into injury time.

It was a remarkable win in many ways, Carlow were five points down when Wexford scored their second goal in the 47th minute and received three black cards over the course of the game but kept plugging away and hauled themselves back into the game.

Carlow looked imperious in the opening quarter and went to the water break leading 1-3 to 0-1 after a ninth minute Jordan Morrissey goal.

The visitors, who knew that only a win would prolong their interest in this year’s Allianz Football League, stepped up a gear after the break and pinned Calow back.

Morrissey picked up the first of the black cards in the 29th minute but Carlow still led at half time, 1-4 to 0-6.

Wexford had missed three good goalscoring chances in that second quarter but finally hit the net in the 40th minute through Sean Nolan and the Wexford centre forward turned provider seven minutes later when he set up Liam Coleman to make it 2-8 to 1-6.

Momentum had long been on Wexford’s side by then and with the goals in the bag it felt like that would pull clear but even though John Murphy went into the sin bin in the 51st minute, Carlow scored four of the next five points heading into the water break.

James McGrath then became the third Carlow man to pick up a black card in the 60th minute, shortly after coming into the game, briefly leaving them with 13 men but in the 67th minute Sean Gannon got his hand to a high Darragh Foley pass and sent it into the net to tie the scores.

The goal clearly rattled a Wexford side desperate for the win but they settled themselves down and took the lead again two minutes into injury time when Sean Ryan slotted over.

Again, it felt like the game had gone away from Carlow but Murphy and Foley came up with the winning scores in the depths of injury time.

Carlow are still in the early stages under new manager Carew but this is the kind of win that will galvanise a team and with five key players in contention to return in time for the semi-final in two weeks against whoever wins the game between Sligo and Louth tomorrow, Carlow look to be a in good place.

For a full report on this game, player and manager reaction, analysis and photos from this game see next Tuesday’s paper.