A brilliant second half performance from Carlow, when they outscored Clare by 2-9 to 0-4 at the Centre of Excellence in Fenagh, was enough for David O’Mahony’s team to qualify from the Littlewoods Ireland Camogie Division 3 as group winners. 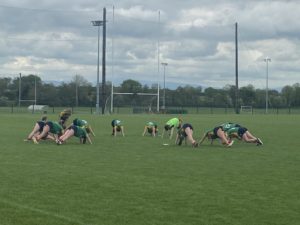 Carlow warm down after their win over Clare today

Carlow were better the side for the majority of the game but after seeing some chances slip by the wayside in the first half, upped their conversion rate significantly after the break and pulled away thanks to two late goals from Eleanor Treacy and Eve Sinnott.

With Treacy landing some brilliant long range scores, Carlow led 0-7 to 0-3 at the first half water break with the only regret that they weren’t further ahead.

The fear that the missed opportunities might come back to haunt them grew in the second quarter when Sarah Loughnane and Ciara Halpin scored quickfire goals against the run of play to swing the game in the favour of the visitors. Those goals helped Clare, who themselves knew a win would be good enough to qualify for the semi-final, led 2-4 to 0-8 at half time.

Carlow had to dig deep in the second half to wrestle control of the game. The sides scored three points apiece in the first nine minutes of the second half and the game felt on a knifeedge, had Clare managed a couple more scores at that stage of the game they may very well have went on to win.

But Carlow’s big players stood up. Treacy was brilliant all game in midfield, while Sinnott really contributed around the middle third having moved out there at half time after Ciara Kavanagh went off injured.

Ciara Quirke dropped out to the half forward position and scored twice as Carlow scored six of the last seven points ahead of the water break. Rachel Sawyer was brilliant through this period of the game as well, her direct running was a constant source of concern for the Clare defence. At the other end, Emma Cody and Mairead O’Shea made sure little made it past the Carlow half back line and when it did, Niamh Canavan marshalled the full back line well.

Carlow led 0-15 to 2-7 going into the final quarter and they picked up where they left off coming out of the water break.

Sawyer landed two cracking points before Treacy sealed the deal for Carlow. Having struck the ball beautifully all game, ironically enough it was the one long distance free that she didn’t quite make the sweet contact that she would have wanted that ended up going through to the Clare net. 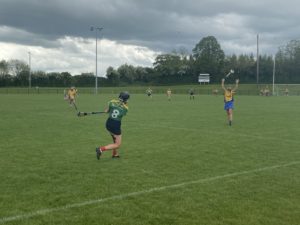 Eleanor Treacy sends a ball towards the Clare goal

That put Carlow five points clear but Limerick’s win over Waterford earlier in the day meant they have to win by more than that total to reach the semi-finals as group winners and Eve Sinnott’s late goal made sure of that. Caoimhe Coady landed the last point of the game to secure a nine point win for Carlow.

A one point win for Wexford over Armagh in the other group was enough for them to top their section and leaves the Ulster side as Carlow’s semi-final opponents.

For a full report, photos, analysis and reaction from this game, see next Tuesday’s paper.