Arlene Foster: Leadership plotters have still not spoken to me 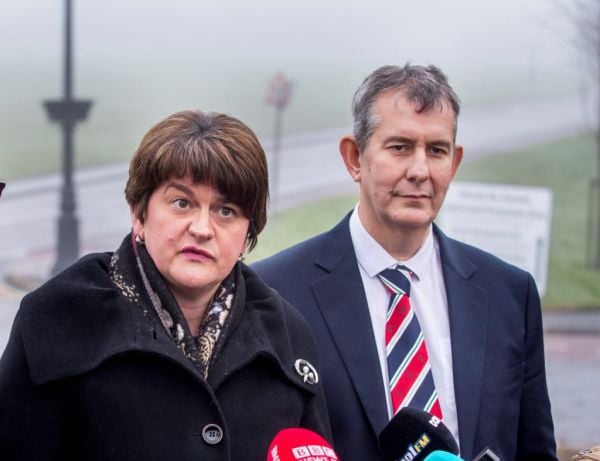 Arlene Foster has said party colleagues in Northern Ireland behind the move to oust her have still not spoken to her about it.

The deposed DUP leader’s remarks came after her predecessor in the role, Peter Robinson, heavily criticised the “vindictive” and “needlessly nasty” manner in which she was deposed.

Mr Robinson contrasted the “humiliating and acrimonious ditching” of Mrs Foster to the “sensitive” way he claimed the DUP handled the late Ian Paisley when members thought it was time for him to step down.

Mrs Foster quit after a majority of the party’s senior elected representatives signed a letter of no confidence, which was instigated by supporters of DUP Agriculture minister Edwin Poots, who has now succeeded her.

The existence of the letter was widely leaked to the media.

“There was of course another way,” Mrs Foster said on Friday.

“Sometimes when I hear people talk about it they say ‘there was no other way’ and of course there was another way and the way to do that was to come and have a conversation with me.

“As yet I still haven’t had a conversation with those people who decided that my time as leader was up.

“That of course is disappointing, but that’s a matter for them as to how they felt that they should deal with the issue.”

In his regular column in The Belfast News Letter, Mr Robinson pointed to similarities in the events the led to the exits of Dr Paisley and Mrs Foster.

He said there had been a petition back in 2008 as well, but he and senior party colleagues decided not to show that to the then leader and instead spoke to him about the situation and urged him to take his own soundings on the views of the party.

Mr Robinson, who would go on to succeed Dr Paisley, said the existence of the petition had not been made public at the time and he and fellow senior DUP colleague Nigel Dodds shredded it to ensure it could not be leaked.

“Compare the party’s action then with the deliberate publicly humiliating and acrimonious ditching of Arlene,” he wrote in Friday’s column.

“It is not the changing of party leader that has caused so much bitterness, it is the manner and handling of the change.

“Arlene would have moved on if someone had gone quietly to her and explained that her colleagues wanted to make a change.

“That’s why she said recently ‘there was another way to do it’.

“Politics is a rough trade and of course it must hurt, if a political career is ended before the participant’s preferred time, but the savage slaying of a leader in the public eye was totally unnecessary and vindictive.

“Moreover, it was counterproductive. It has caused serious damage to the party, and equally inflicted self-harm upon her successor.

“One has to wonder what kind of strategy those advising Edwin are following when they took, and continue to take, decisions which can only damage his prospects of moving the party forward.

“More and more it is being said that for some in Edwin’s camp it is all about revenge as they could have achieved the same outcome without spilling blood.”

Mr Paisley, who supported Mr Poots’ leadership bid, said last Thursday: “If anyone in this party can talk about difficulty, it’s me, you saw what happened to my dad, it killed my father.”

While criticising the Poots camp, Mr Robinson also urged those party members angry at the new leader to give him a chance in the role.

“There can be no lasting advantage to those who are unhappy with Edwin’s takeover, other than the short-term satisfaction gained, from seeking revenge or using their recently learnt-experience to destabilise the new regime or waiting for the opportunity to launch a countercoup,” said Mr Robinson.

“That will destroy the party just as surely as it will damage the prospects of those who engage in such an operation.

“Recent events have left people across NI asking questions about whether the DUP is still capable of leading unionism.

“Our faithful members and supporters want cool and steady heads at this time, and they deserve to experience in our temperament and actions the better angels of our nature.”

Mr Robinson urged Mr Poots to reach out to his opponents in the party.

“He will lose nothing and probably gain a lot if he were to acknowledge that the process of removing Arlene was needlessly nasty,” he wrote.

Responding to Mr Robinson’s characterisation of the events of recent weeks, Mr Poots insisted the former leader was “out of the loop”.

“The problem that Peter has is he is out of the loop and therefore doesn’t know exactly what was going on or what happened,” he told BBC Radio Ulster.

Mr Poots said the only difference in what had happened in the moves against the two former leaders was that the letter against Mrs Foster had been made public, something he insisted was not done by his supporters.

“So what was good for Peter doesn’t seem to be good for anybody else,” he added.