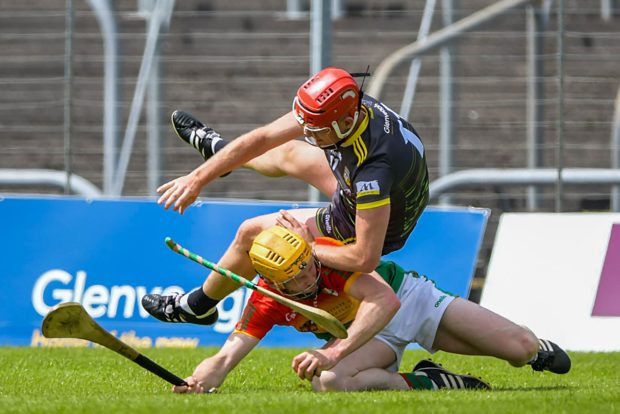 Carlow’s Ger Coady manages to hold onto the ball with Meath’s Jack Regan on his back during their sides NHL Div 2A match in Pairc Tailteann, Navan.
Photo: GERRY SHANAHAN-WWW.QUIRKE.IE

ALMOST from the throw-in Carlow cut loose to put the home side to the sword with relative ease in this National Hurling League Division 2A tie in Navan on Sunday. Playing into the breeze, John Michael Nolan’s 2nd minute effort from an acute angle on the right was straight and true.

The score set the tone for the remainder of the game and following on with a Chris Nolan point Carlow were never headed. With Kevin McDonald adding a goal the eventual winners surged into a 1-3 to 0-1 lead inside the opening five minutes. Nolan could have added another goal but Meath keeper, Charlie Ennis, brought off a great save. Even then Marty Kavanagh’s resultant 65 flew straight and true over the black spot for yet another point.

With James Doyle playing as a sweeper in the half-back line Carlow were rock-solid. There was no real area on the field where Carlow players were not winning their individual battles.

At midfield Jack Kavanagh was the link-man between a solid defence and a forward line who knew exactly where the opposition goal-posts were. Much of the ball was dispatched into Meath’s left-hand side of the defence. It looked like part of a simple game plan and it worked. Meath were opened up at will.

On 18 minutes, Chris Nolan may have needed two attempts to beat the Meath keeper but it was a goal anyway. Jack Kavanagh off-loaded to Nolan who fed John Michael who shot home from point-blank range, three minutes before the break.

For almost the whole game Meath lived on crumbs. In the first half Jack Regan converted a number of frees while Keith Keoghan at left-half back scored two Meath points. At the break Carlow led 3-15 to 0-9. The writing was on the wall for the Royals.

Not every team will dominate for an entire seventy minutes but it is hard to pin-point any period of the game where Meath enjoyed a spell in the ascendancy. Carlow were irrepressible. Marty Kavanagh scored their fourth goal in the third quarter when he got inside the Meath defence at the score-board end of the ground.

McDonald added his second goal when the Meath defence were caught flat-footed and one of Carlow’s form players so far this year netted with a degree of panache. It was simple stuff. Ger Coady tacked on a point late on and by the end three of Carlow replacements, Tony Lawler, Paul Coady and Craig Wall all raised white flags. The competition for places is hotting up. Young men are learning their trade alongside some of the finest Carlow hurlers who have been around for quite a while now.

There will be bigger challenges ahead but in Navan on the Sunday of the Bank Holiday weekend, Carlow did what they needed to do and did it well.