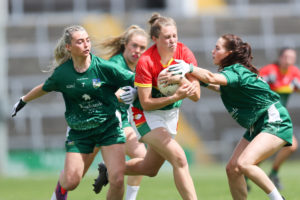 DESPITE a battling display in the Limerick IT Gaelic Grounds on Sunday afternoon, it is Limerick who progressed to the Division 4 league semi-finals after a fierce battle.

Goals in each half proved the difference as Limerick edged a game in which both sides struggled to convert their chances.

The water breaks proved important in this game as Limerick outscored Carlow by 1-2 to 0-2 after the initial stoppage in play while the Treaty side raced out of the blocks after the second water break, as they struck for a decisive goal to put six points between the sides.

It was Carlow who started the quicker as Niamh Kelly kicked the opening score of the game before Katie Heelan responded for the home side.

Carlow managed to squeeze up on their opponent’s kickout and it paid dividends in the opening exchanges with Carlow winning three of the first four Limerick kickouts. This helped them to dominate the opening quarter of the game.

Rachel Sawyer proved to be a thorn in the side of the Limerick full back line as she was fouled twice in as many minutes. Bennekerry/Tinryland club woman Cliodhna Ní Shé converted the first before she added the second from an acute angle.

Limerick began to settle in to this game as they looked dangerous on the counter attack with an Iris Kennelly point cut their deficit to a point at the water break.

The water break helped Limerick as began to turn the screw on the Carlow kick out with Mark Keating’s side struggling to get out of their own half. Carlow remained dogged in defence with their opponents kicking seven first half wides, with all of them coming after the water break.

However, Katie Heelan and Amy Ryan scores pushed Limerick ahead for the first time but Ní Shé levelled the game after an excellent move involving herself, Aoibhinn Gilmartin and Sara Doyle.

Limerick continued to spurn opportunities, but disaster struck for Carlow in the second minute of injury time when Amy Ryan played Andrea O’Sullivan through on goal and the centre forward emphatically finished to the net. The industrious Niamh Kelly kicked an excellent score for Carlow to leave Limerick leading by 1-4 to 0-5 at half time.

Similar to the opening half, Carlow started the quicker of the two sides, but they struggled to convert the chances they carved out against a resolute Limerick defence.

Carlow almost managed to find the net when Sara Doyle’s long range point effort dropped short with Limerick goalkeeper Sophie Hennessy almost spilling the ball in to her own net. However, the ball stayed out as neither team managed to notch a score in the opening 10 minutes of the second half.

A pivotal moment occurred in the 40th minute after a move which started in the Carlow half back line ended with Rachel Sawyer bursting through the Limerick defence before offloading to Ní Shé. The centre forward was one on one with Hennessy in the Limerick goal, but the Bennekerry/Tinryland club woman saw her low effort saved.

Ní Shé showed her composure to gather the rebound and manoeuvre enough space to kick her side’s opening point of the second half.

Limerick struggled to convert frees in the opening half, but midfielder Caroline Hickey proved accurate from placed balls, and it was she who responded for the Treaty side.

Amy Ryan and Iris Kennelly linked up for Limerick with Carlow goalkeeper Nicole Hanley producing an excellent point blank save from Kennelly. Amy Ryan pointed just before the water break as Carlow trailed by three points.

When play resumed Andrea O’Sullivan played Kennelly through on goal and this time the wing forward rattled the net in what was a decisive blow.

Carlow continued to battle, and Niamh Kelly added a point, but their cause was not helped by the sin binnings of Niamh Forde and Ní Shé late in the game.

The sides exchanged scores in injury time as Carlow fell short in their attempt to reach the league semi-finals.