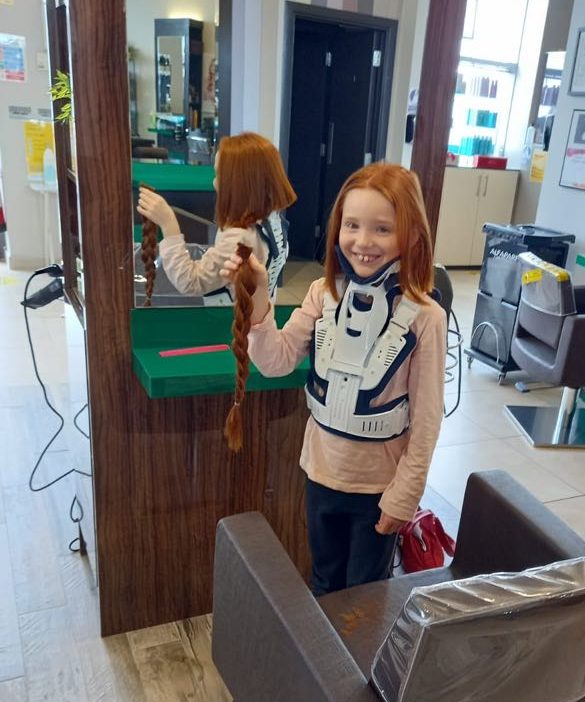 Eight-year-old Aoife chopped off her hair, ahead of getting chemo herself

By Elizabeth Lee
EIGHT-YEAR-OLD Aoife Treacy has just taken the brave step of getting her long, titian tresses chopped off after spending years of growing her hair.
Aoife’s gorgeous red hair was flowing all the way down her back, but she decided to chop it off so that she could donate the ponytail to The Rapenzel Foundation, a charity which makes wigs for children and adults who have lost their hair through cancer treatment or by any other means.
Aoife had heard about The Rapunzel Foundation two years ago and vowed to grow her ponytail the requisite 14 inches so that it could be made into a wig. Her parents Martin and Olive (née Fanning) from Pollerton Manor, Carlow thought her pledge might be forgotten over time, but Aoife was determined to go ahead with her plan. She had intended on getting her hair chopped this summer straight after her Communion with the other children at Bennekerry NS, but the situation changed horribly at Easter, when she began to get backache.
Within a couple of weeks, her movement had become quite restricted. Simple things she’d taken for granted were either impossible or leaving her exhausted. Her GP was concerned and sent her for an MRI. Within days she was admitted to Temple Street Hospital and underwent major surgery to remove a tumour and reconstruct part of her spine, which had been damaged by the growth. Shortly afterwards, Aoife and her family discovered that the tumour was cancerous. The cancer was found in other sites, too. As a result, Aoife would have to undergo a course of chemotherapy at Crumlin Hospital.
Undaunted by everything she had faced and what lay ahead, Aoife remained upbeat, giving strength to her family, who were still coming to terms with what had happened in such a short space of time. When Aoife was told it was likely she would lose her hair because of her chemo treatment, she decided to bring forward her planned chop to make sure her precious hair wouldn’t go to waste and could still be used to make a wig.
Siobhán and Maria of Sandra’s Hair Studio in Carlow kindly obliged by cutting Aoife’s hair, enabling her to realise her dream and donate her ponytail to the Rapunzel Foundation. 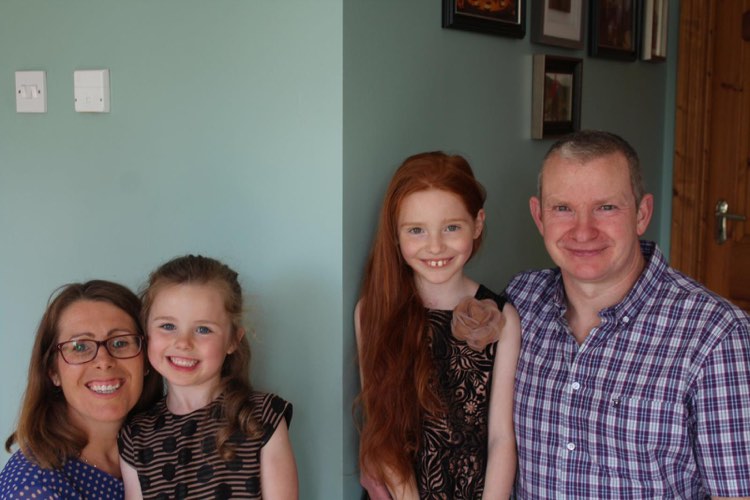 Aoife’s parents and her younger sister Tara (6) are so proud of her and how bravely she is in dealing with her diagnosis and treatment. They wanted to share her story to raise awareness of how easily any family’s world can be turned upside down when a child becomes seriously ill. They also wanted to use it as an opportunity to raise much-needed funds for the Children’s Health Foundation, an umbrella organisation covering the two hospitals that are taking such good care of Aoife. These hospitals provide an invaluable lifeline that countless families rely on for support through challenging times.
Thankfully, the prognosis is good for the type of cancer Aoife has been diagnosed with. Langerhans’ Cell Histiocytosis (LCH) typically responds well to treatment, especially in children. Brave Aoife’s outlook remains positive. Her family believes that seeing the impact her fundraiser can make in terms of giving back to Temple Street and Crumlin could add more pep to her step and aid her recovery further. To support Aoife with her fundraiser and make a donation, go to   www.justgiving.com/fundraising/aoifetreacy.