Carlow out to break Louth’s Harte with promotion at stake

AFTER a comprehensive 3-16 to 0-10 win over Waterford and crafting out a narrow 2-12 to 2-11 victory over Wexford, Carlow will not be lacking in confidence when they take on Mickey Harte’s Louth on Saturday in the NFL 4 semi-final at Netwatch Cullen Park at 4pm. To get here, the Wee County enjoyed comprehensive wins over Sligo and Leitrim and lost narrowly to Antrim (1-15 to 3-8).

For long spells, Carlow’s victory over Wexford didn’t look likely but a late equaliser from John Murphy and a late, late winner from Darragh Foley gave them a 100% record in the three team group.

“It was a game we could have lost in previous years. The Limerick game last year springs to mind and other games when we were in Division 3. It was great to get the win but the performance wasn’t as good. There are things to work on,” stressed Murphy. 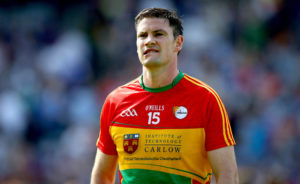 Supporters will be allowed into the game on Saturday. The Grange man says this will be a huge lift for Carlow and recalls they got a sneak preview of what it is like to have support when a small group of young lads created a viewing area outside the ground but high enough up so that they could see the game against Wexford.

“We had the Bush Ultra’s the other day and it was great to hear them,” said John.

It was a theme selector, Simon Rea, took up on too.

“Do you know what was really good the last day? The Bush Ultra’s up on the wall. They were like 200 people themselves shouting. It is amazing what it does and the talk in the dressing room after the game was about the group of young lads up on the bank. 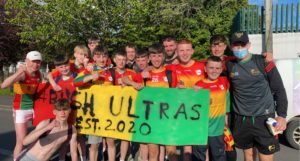 “That is a positive. Little things help and I think they are going in the right direction with spectators coming back. I know myself having been in there you definitely get a kick out of it. No question. If you get a turnover, you get a score the reaction drives things on.”

The Éire Óg man has taken the short route from player to a member of an intercounty management team. After an illustrious career with Éire Óg Rea was asked by Turlough O’Brien to come in as a selector.

“He asked me but, timewise, I was up the wall. At the same time you don’t get too many opportunities to give a little back. I was excited to go in as well. Hopefully to try and get the team back out of division four after going down the previous year.

When Turlough stepped down, Simon was asked would he stay on. He was happy to do so and he likes what Niall Carew and Ger Brennan have brought with them.

“I was delighted when Niall asked me to stay on. We had a good chat about the way he was going to do things. 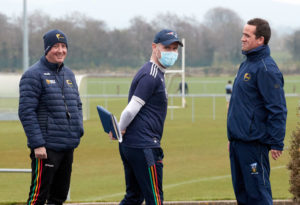 “He likes guys to play with their heads, likes guys to get the ball forward as quick as they can. That struck a chord with me as that is the way I like to play the game myself. With Ger there and four games we have not had a huge amount of time as a management team when you think about it.”

Now after a 2020 league win against Sligo, a 3-14 to 0-20 Leinster championship defeat to Offaly and a place in this year’s league semi-final Rea says Carlow are going well under the new manager.

“The one thing I would say about the four games there has been an improvement in all our games and have shown a bit of character particularly in the last game when things were going against us. We are working on things, the players are enjoying it and are buying into it. We are looking forward to Saturday  now.” 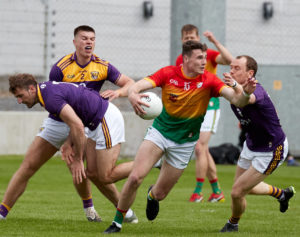 Jordan Morrissey was among the goals during Carlow’s win against Wexford
Photo: michaelorourkephotography.ie