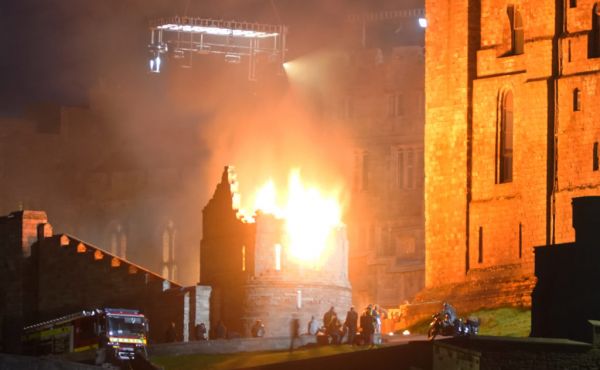 Photos taken from a night shoot of the new Indiana Jones movie show a dramatic fire staged at a historic coastal castle.

A Second World War-era motorbike is visible in one of the images taken at Bamburgh Castle in the North of England by PA news agency photographer Owen Humphreys.

Harrison Ford is reprising the role of the world’s most daring archaeologist at the age of 78 but it was not clear if Dr Jones was the man on the motorbike.

However, the dramatic scenes have led to speculation that the fire and the bike were linked to yet another death-defying escape from the Nazis.

Bamburgh Castle has been closed to the public for several days and Second World War vehicles have been spotted being delivered to the site in the run up to filming.

Local residents were warned that filming would be taking place at night and there might be loud noises.

On Thursday evening into Friday morning, the crew staged a fire on the set which lit up the night sky.

Mr Humphreys said: “They started to test the set around 9pm and filming went on to about 1am.

“They staged a fire and we could see a man on a motorbike going up to the castle – it could be a prison break scene, after all, this is Indiana Jones.

“It looked spectacular in the night sky with the backdrop of the famous castle.”

During down time from filming, Ford has been spotted cycling along the Northumberland coast and on Tyneside.

Earlier in the movie schedule, he tipped his famous hat at a young fan in Grosmont, North Yorkshire, and told him he was Indiana Jones’s stunt double.

Meanwhile, Newcastle Dog and Cat Shelter has been swept up in the excitement and named a litter of four kittens Harrison, Ford, Indiana and Jones.

Once they are old enough to be rehomed they will go on the shelter’s website https://www.dogandcatshelter.com/our-cats/