ON Saturday, Carlow will take on Armagh in the Littlewoods Ireland camogie Division 3 semi-final in Ashbourne at 2.30pm. On a number of fronts the memories are mixed since that wonderful day five years ago in Croke Park when the Barrowsiders beat Armagh in the National Premier All-Ireland final. Having subsequently played in Division 2 of the league Carlow are now back in Division 3.

Around for the good times, current centre-half back, Mairead O’Shea, says there is an ache to reproduce those great days.

“It is good to be going well again and hopefully we can go back up to Division 2,” suggests the St Mullins player.

“At the start of the year it was about winning one match and after that the target is to get back up into Division 2. It was a hard year when we came down and we felt it was a step backwards at the time.”

There is a lot to be optimistic about at the moment. The players are hungry for success and even the draw against Limerick didn’t sit easily on their shoulders.

“We were disappointed. We were a few points up but we ended up drawing,” pointed out Mairead.

Having beaten Waterford in the first round a draw or a victory at home to Clare would have seen them come out of the group. After a shaky spell in the second quarter where they conceded two goals Carlow eventually won 2-17 to 2-8. 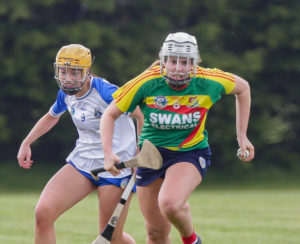 The determination across Mairead O’Shea’s face during the win over Waterford has been replicated throughout the Carlow team during this season
Photo: Maurice Hennebry

“We were worried ourselves going in at half-time. We had been up but we let in two sloppy goals. Something changed at half-time. We knew it was do or do and if we lost it we were out. When we got on a roll we were able to finish the game out.”

That was good enough to see them top the group. Now they face Armagh in the semi-final. The Northerners enjoyed a comprehensive 5-9 to 1-1 win over Down but lost to Wexford by a single point (1-14 to 0-16).

Even though Carlow ran out 4-10 to 2-7 winners against Armagh in the 2016 All-Ireland final, Mairead recalls Carlow had to be at their best that day.

In 2020, Armagh banished the memory of their 2016 defeat when they beat Cavan to win the Premier Junior All-Ireland title. Now they are out for revenge against a Carlow side who have made many changes since then.

“They were no easy task. A tough side. There are two Donnellys (Ciara and Leanne) who are very good,” notes Mairead.

Carlow manager, David O’Mahony, has got three performances out of his side so far this year. He knows they are not perfect but they are progressing and doing what is required.

“There are things to work on but we have played well in all three games. We are still unbeaten and it is positive,” he says.

Yet they were caught cold after the water-break against the Banner County. Conceding two goals was a set-back and asked questions of the side.

“Clare certainly did put it up to us. Looking back over the game we got some of our best scores in that first fifteen minutes. We were 0-7 to 0-3 ahead at the first water-break but we had a very bad fifteen minutes then and were two points down at half-time.

Is the water-break a momentum breaking issue for some teams? O’Mahony says it shouldn’t be.

“It happened to us against Limerick as well. I don’t know if there is anything in it. It is an anomaly. There is no reason why we should lose momentum after a one-minute outbreak.

Out with appendicitis, Kate Nolan, will not be back for this game. Midfielder, Ciara Kavanagh, is also a doubt. Defender, Rachel Breen, is also nursing an ankle injury. Aoife Carroll and Rebecca Sheehan are doing their Leaving Certificate exams.

The Carlow manager says his side will need to bring their A game with them.