CARLOW sprinter, Molly Scott, has put herself in pole position to be selected on the Irish team to take part in the u 23 European Athletic Championships which takes place in Estonia from 8-11 of July. 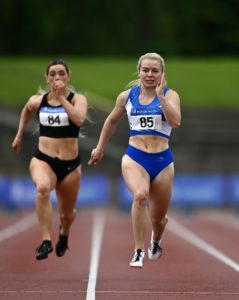 Molly Scott of St Laurence O’Toole AC, Carlow, right, on her way to winning the Senior Women’s 100m, ahead of Lauren Roy of City of Lisburn AC, Down at Morton Stadium in Santry, Dublin. Photo: Sam Barnes/Sportsfile

At the AAI and Irish Life Health National Senior and junior Combined Events Championships held in Santry over the weekend she recorded a personal best in the 100 metres final posting 11.39 seconds. While that time was wind aided, in her heat a few hours early she had already run a time of 11.61 in ideal conditions which if the team was being selected now would be good enough to ensure her selection.

“The final (11.39) was a windy PB. It was over the legal limit. It goes towards ranking events but in the first race I ran 11.61 and got the European under 23 qualification,” she explained.

“It (the heat) was perfect. The wind in the first race was legal. The first race was very early and it was very flat. For the final the wind had picked up then. Only three get picked to go to the European under 23s and three people had already run faster than me. I ran faster than one of them yesterday but that doesn’t mean I am on the plane yet. There are two weeks left,” Molly cautioned.

The championships which are held every two years was originally due to be held in Norway but with ongoing Covid restrictions the host country was forced to withdraw and now the event will be held in Tallinn.

Molly, who is currently studying for the Bar exams which takes place in August, is in good form at the moment. Outside the top eight in the world relay championships a few weeks ago, it would take a different turn of events if she was to be part of a team or as an individual which would record the times which would get her into the Tokyo Olympics.

In the meantime she is getting on with her studies, her training and looking forward to registering more career best times.

Jack Mitchell, who is also showing great form this year, lined up in lane 4 in the 400m hurdles with his club mate Alan Miley in lane 6 and from the gun Jack was in complete control and crossed the line with a European qualifying standard of 51.73s. Jack is in University Limerick college and trains with Olympian Thomas Barr. The runner up Alan Miley was just short of the standard for the European U20 with a time of 53.73s, Alan needed 53.50 which he can achieve next weekend at the National U20 championships. 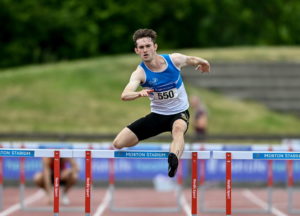 Other notable performances over the weekend were Matthew Callinan Keenan who claimed the gold medal in the pole vault jumping 4.55m, massive clearance from Matthew who is very close to that 5m barrier. In the same competition was training partner Adam Nolan who placed fifth with a jump of 3.65 but in  the high jump Adam took the bronze medal away with a 1.95m jump and inching closer to clearing two metre barrier. 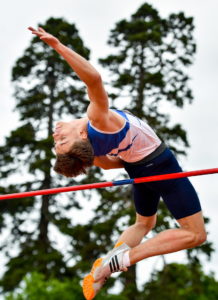 Adam’s sister Kiara Nolan had a fine competition in the discus with a PB placing sixth with a throw of 31.89m. In the same race as Molly, Sive O’Toole placed eighth with a season’s best improving on last weekend with a time of 12.31 and in the 200m in race 2 Ciara Moore placed fifth in a time of 27.22 and race 3 Chloe Hayden placed third in a time of 26.21. 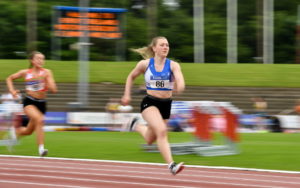 Well done to Art Murray, Tadhg Ryan in the pole vault, the Doyle sisters of Elsa, Catherine and Shiela who competed women’s 800m.

Congratulations to all especially Molly and Jack on qualifying for the Euros and let’s not forget all the athletes over the weekend competed at senior level, the AAI Games is an excellent competition and not an easy one to medal at. The futures bright for the St Laurence O’Toole club. 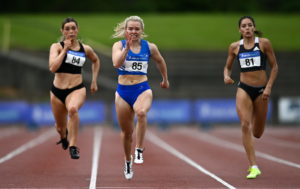