IT was the battle of the experienced Crettyard versus the exciting Killeshin. It was the experience of Crettyard that won out as they dominated the game to bring home the league title back to Crettyard for the first time in four years. However, they will feel like they should have won by more. They had all the chances and bossed the game with Killeshin struggling to get into the game, their star man, Shane Coakley being kept out of the game. 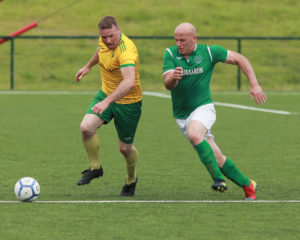 Crettyard’s Garry Rowan gets to the ball ahead of Killeshin’s Emolavek Przonyegu during the over 35’s league final playoff at Graiguecullen on Sunday
Photo: Karl McDonough

There was a number of half chances early on in this game, one of the first, if not the first to be played on the new astroturf in The Meadows in Graiguecullen. The first real chance fell to Crettyard who had a free on the left, Jimmy Dunne’s effort being saved. The Killeshin ‘keeper did fumble but kept his cool. It was on the 15 minute mark that Jason Enright found himself in plenty of space just outside the box and shot into the top left hand corner. Crettyard didn’t sit back and kept going, a shot going wide, a corner from the left hand side being cleared before a Garry Rowan corner found Jason Enright who couldn’t control the ball and he sent it wide. As half-time approached, they went close with a couple of shots just missing the back of the net and a header from a corner from the left hand side narrowly missed the bottom corner. 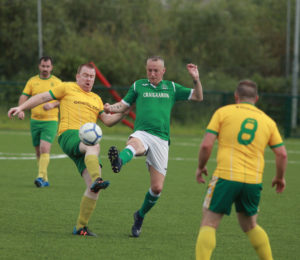 Shane Coakley (Killeshin) and Mark Kelly (Crettyard) tussle for the ball during the over 35’s league final playoff at Graiguecullen
Photo: Karl McDonough

The second half started much the same, Phillip Brennan went close with an effort but found himself the wrong side of the goal and unable to control the ball. Brendan Fox also shot wide. Just after the hour mark, Killeshin had their first attempt on target when Glen Ryan went close but found his effort saved. John O’Neill went close for Killeshin again minutes later but found his effort from distance saved. Cretty weren’t going to lie down though and forced a corner on the left hand side which Brennan hit over the bar. Tom Dowling found his effort saved too after he met a cross from the left hand side. Killeshin launched a late flurry of attacks, a header cleared off the line, an effort going over the bar and a couple of wide efforts too but Crettyard held out to win yet another title for their cabinet. They have the chance to win the double next week when they face Baltinglass in the cup final. 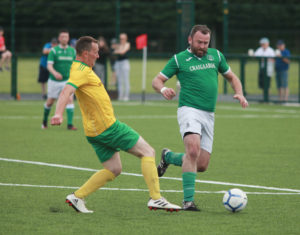 HSE building beside crèche is crawling with rats