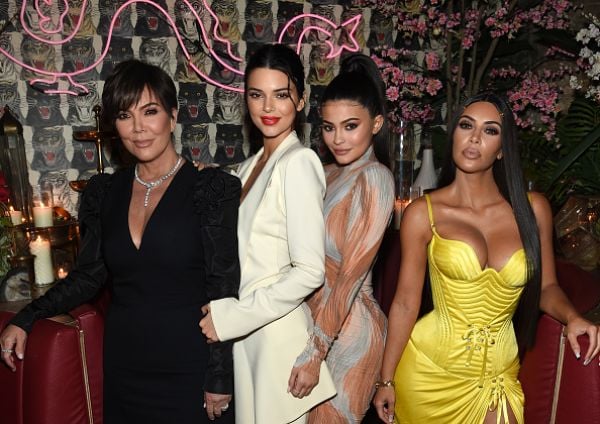 The Kardashian-Jenners reunited for a two-part special following the end of their long-running reality TV show.

The famous family discussed controversies including their failed marriages, Kim’s sex tape and one of their famous on-screen fights.

Here are some of the highlights from part one of the Keeping Up With The Kardashians reunion:

#KUWTK started a year after Twitter was invented. Tomorrow, we’ll be announcing the fans who Kept Up the most on Twitter throughout all 20 seasons! So… think you made the list? 👀 pic.twitter.com/PkE6Y56BE7

Kim on her sex tape

Kardashian West made headlines in 2007 when a tape involving her and ex-boyfriend Ray J emerged.

She told the reunion she has not addressed the video with her children but admitted it was her one regret.

“I try not to have any regrets but it’s probably the one thing I wish didn’t exist and if I could erase any of the stupid things I’ve done in life, that’s probably it.”

Kylie on her insecurities

Kylie Jenner (23) was once contentiously named the world’s youngest self-made billionaire thanks to her cosmetics business – and it turns out the enterprise has a surprising genesis.

She said she was insecure about her “thin” lips after her romantic interest from one of her first kisses commented on them. It forced her to use makeup to make them look thicker and led to her hugely popular lip kits.

Kylie said the boy’s comments made her feel “unkissable,” adding: “I had an insecurity because this guy said something to me one time. Then I got an obsession with makeup because I would overline my lips and it just made me feel confident. I obviously don’t think about it now.”

Kim on her split from Kanye West

She filed for divorce in February after tying the knot in 2014. They have four children together.

Kim refused to go into details about the split and said: “I honestly don’t think I would say it here on TV, but it was not one specific thing that happened on either part.

“It was just a general difference of opinions on a few things that led to this decision and in no way would I want someone to think I didn’t give it my all, or not really try.”

She added: “I will forever be Kanye’s biggest fan. He’s the father of my kids. Kanye will always be family.”

Kris Jenner on her split from Caitlyn

Kris (65) was married to Caitlyn (71) for more than 20 years before the latter’s transition.

She said they would have split regardless and their daughters were the highlights of the marriage.

Kris said: “I think that we had a lot of really great years. I think that everything also is meant to be, and I think what was meant to be out of that relationship was Kendall and Kylie.

“Without that, I wouldn’t have one sixth and one sixth of my heart sitting here. And that I’m so grateful for and feel like it was such a blessing.”

Kourtney “the nail digger” Kardashian weighing in at 108 pounds…Kim “the kicker” Kardashian West weighs in at 128 pounds… https://t.co/pLBK0bEwSv

Kim and Kourtney came to blows in a 2020 episode following an argument over their roles on the show.

They were not happy with the fight making it to the screen but on the day of their confrontation a representative from the E! network was on set and saw it unfold.

“They didn’t want it shown but also an E! rep was there and they knew what happened,” Khloe said.

She revealed she almost called it off on the eve of the wedding but was scared of being known as a “runaway bride”.

Kim on her dating life

Despite reports linking her to new romances, Kim said she was single.

She said she was open to dating someone who was not a celebrity and dismissed rumours she was seeing lawyer Van Jones or Colombian singer Maluma.