CURRENT Carlow manager, Niall Carew, was appointed in August 2020. By now and in normal circumstances an intercounty manager would have had at least ten competitive matches under his belt. In that time-span there would have been at least two O’Byrne Cup ties, at least seven league games and one championship test behind both manager and players. The current and freshly formed Carlow management squad have had no such luxury. In contrast to other managers who have been in situ for a number of years now they are working blind. 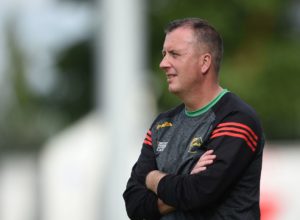 “We are working in training and in practice matches. We are still in our infancy in terms of new management. We only had four league matches. One last year, three this year-four altogether. We never had an O’Byrne Cup and only one championship game (Offaly) so we are still learning about the players,” the Kildare man says.

Whatever about losing to Offaly in the championship last year, the recent reverse to Louth and the manner of the defeat is worrying. The Wee County players ran through Carlow and the home players had no answers in the recent division 4 semi-final. They played a practice game against Kildare last week and it was here Carew looked for a response.

“It was to try and put things right in the aftermath of what we did wrong against Louth. We had a good run around there, gave all the lads 20-25 minutes just to get it out of our system. It went well so the big thing for us now is to put things right against Longford.”

Their opponents on Sunday consigned Tipperary, the reigning Munster senior football champions, to a place in division four football next year. That was a decent result but Carew delved deeper into the Longford performance.

“They are operating out of Division 3 for the last few years. They are a seasoned team with the same players that I would have managed against when I was with Sligo . They haven’t changed much.

“They remind me a bit of Clare who get the best out of themselves. We will have to be at our best to beat them.”

Even though he is sending up the opposition, the Carlow manager says his team can cause an upset. He says Carlow football is singing from the same hymn-sheet and that they have nothing to fear.

“Everything we have asked of them (the players), they are doing it. The County Board is very supportive. The clubs are rowing in behind us. We don’t have excuses only that we don’t have enough time. The only thing if we put the things right that we did wrong against Louth then we won’t be too far away against Longford,” Carew insists.

He goes on to say he would much prefer to have a good run in the championship. He has a point. Conor Lawler’s surge forward and his late goal against Kildare in the 2018 Leinster senior football championship will never be forgotten. It was a magical championship moment.

“We want to get more of those memories back as that encourages our 10-12 year olds to want to play football for Carlow.”

And can his charges win on Sunday?

“We still feel we have enough talent there to progress this group. We are hoping for a massive performance against Longford and if we do that we will come away with a victory. If we don’t play at our best, we won’t win. It is as simple as that. If we play to our potential I am very confident we will get a victory.”