CARLOW have been dealt a huge blow ahead of their Joe McDonagh opening round game against Kildare on Saturday in Newbridge with the news that star forward Marty Kavanagh will miss the entire Championship season. 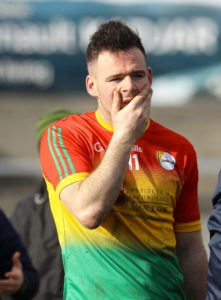 Marty Kavanagh’s injury is a cruel blow to Carlow and the player himself
Photo: ©INPHO/Lorraine O’Sullivan

The St Mullins man injured a knee in training and while the severity of the injury still needs to be fully assessed he certainly won’t appear in a county jersey again this year, and even his club season could be affected.

It’s a cruel blow both to the player and Carlow team. Kavanagh scored 4-60 in the Allianz Hurling League this season, making him comfortably the top scorer across all the divisions and he was part of a Carlow forward line that was showing signs of hitting top form.

After defeats to Down and Offaly, Carlow bounced back to score 5-28 against Meath and 3-25 against Kerry, with Kavanagh top scoring in both games. While there is no softening the blow of losing such an influential player, it just means that the likes of Chris Nolan and John Michael Nolan will have to step up to the mark and the scoring burden will need to be shared around the forwards.

Carlow’s opponents on Saturday, Kildare, also suffered an injury blow during the week when experienced midfielder Paul Divilly was ruled out of the game due to a calf injury.

Despite that, Kildare will go into Saturday’s game full of confidence after recently adding the Division 2B league title to the Christy Ring Cup they won in Croke Park last November. Carlow manger Tom Mullally will know well the challenge his team face as he also manages Kildare senior champions Naas, a club who provided seven starts and three subs for Kildare’s last game against Mayo.

“It is a formidable test for us. Being the first game taking the eye off the ball doesn’t even come into the question. We are only going well enough and I think the form team coming into the Joe McDonagh Cup is without a doubt Kildare. We have to identify where we are in relation to 2021 and I think the first game will show us a lot on that,” said Mullally, when speaking before news of Kavanagh’s injury.

Westmeath are the other side in the group and with the top side going straight into the Croke Park final there is no room for error heading into a pivotal few weeks.