Ballickmoyler water supply has been turned off since last November 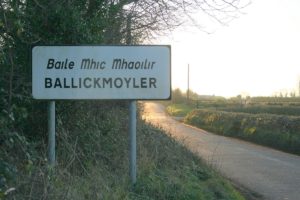 FOR seven months, pensioners have been left without the water to even flush their toilets in Ballickmoyler, said cllr Ben Brennan, calling on Irish Water to explain what was causing this “totally wrong” delay.

At the June meeting of Laois County Council, cllr Brennan said the water had been turned off in Ballickmoyler since last November.

“There was a big amount of money spent on that to do it up in 2013 and now the residents are left in limbo and left with no water,” he said. “The old people in that area are entitled to fair play; they can’t flush their toilets.”

He asked could the council get Irish Water to come in and discuss the issue.

Director of services Simon Walton said that the new enhancement works to The Strand water supply were now completed and these had to be monitored for 30 days. He said the boil water notice would be lifted in late July or early August.

“The problem is,” replied cllr Brennan, “to walk away and leave these poor people without a drop of water was wrong. That’s going on for seven months now. Pensioners had to buy water – it’s wrong. Seven months of boiled water notices is totally wrong.”

Cllr James Kelly asked was Laois going to be put under pressure by Irish Water’s conserve water campaign, to which Mr Walton replied that the situation was weather-dependent, but there are risk areas, and measures have been introduced in Portarlington that the council hope will prevent the problems of previous summers reoccurring.

He said there would be emergency measures at Coolbanagher to ensure the Laois water supply is not impacted.

Mr Walton added that “Irish Water are the decision makers” and the campaign to conserve water is being run by them.