IN a repeat of the 2018 Joe McDonagh Cup final, Carlow and Westmeath clash on Saturday afternoon at 3pm in Netwatch Cullen in what is very close to a semi-final.

It is for Carlow at least. After their win over Kildare last week a win for Tom Mullally’s team will secure their place in Croke Park for the decider on 17 July. A win for Westmeath would leave them needing to beat Kildare in the final group game to clinch their place in the final.

A lot of water has passed under the bridge since that 2-26 to 1-24 win over Westmeath in the 2018. Since then, Carlow have competed at the top level in Leinster and dropped back down under Colm Bonnar before Mullally took over for this season. 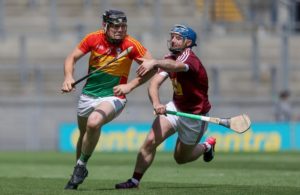 Carlow also moved into the top flight of the league but lost their status among the elite when Westmeath gained revenge for the McDonagh Cup final in the Division 1 relegation play-off in March 2020 just before the lockdowns because of Covid struck.

Because of that win, Westmeath have been playing their hurling in the league at the highest level this season but it’s hardly been an enjoyable experience. They lost all five games and finished the group with -106 scoring difference, although they did perform admirably in their last game against Limerick before conceding three late goals.

Whether they have benefited from playing at a higher or whether their confidence has taken a knock after such heavy defeats is one of the key questions ahead of the game.

Carlow suffered the blow of losing star forward Marty Kavanagh to a season-ending injury in the lead up to the game against Kildare last week and there were times during the first half when it looked like they were really missing their most potent score taker.

However, Mullally’s men grew into the game and though given a tough game by a gallant Kildare side having come through that they should be well prepared for Saturday’s challenge.

“Kildare winning the Christy Ring and winning the league, people might have said they were underdogs but that kind of form brings serious momentum. It is something you cannot put a price on. We would love to have that form. We would love to say we won the Joe McDonagh and won the league last year. That brings confidence and we are working game by game trying to get as much confidence out of it,” said Mullally after the game.

He was obviously disappointed by the lost of Kavanagh through injury but was pleased with how other squad members stepped up.

“No doubt a top forward is irreplaceable and that is where you want lads to step up more too. It (Kavanagh’s injury) does tend to provide opportunities for other players and lads did get an opportunity to show themselves. I thought it was a fantastic performance and gets us off to a winning start in the Joe McDonagh,” he said.

Full back Michael Doyle was also sorry to see Kavanagh out and knows that every player will have to give that bit extra to make up for his loss.

“A huge loss. An unbelievable hurler but look ,we won the Joe McDonagh without him the last time when he was gone to America so it just means everyone has to take it up 5%. I wish him a speedy recovery but everyone else is more than capable of getting us over the line,” said Doyle.

Doyle was pleased with how Carlow finished strongly against Kildare and feels they are in good shape for the huge challenge that lies ahead on Saturday.

“We have put a lot of work into fitness levels. You will see the fruits of it in the semi-final against Westmeath. That is what we are aiming for now. To finish the last seventeen minutes, the last quarter well is what we are looking for,” said Doyle.