Byrne family finally get to see Ed in action for Ireland

It was a special day for Tom and Anna Byrne on Saturday. They are the parents of former Carlow player, Ed Byrne, who came on for Ireland against Japan on Saturday in the Aviva Stadium.

Capped against France and Italy in the 2019-20 season and twice more against France and Wales last season (2020-21), it was the first time his mother and father were actually in the stadium to see him play for his country. They were overjoyed to be one of a limited number of people to be allowed attend the match. They were accompanied by Ed’s twin brother, Bryan, who is recovering from a knee operation. 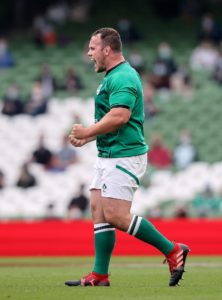 “It was very emotional as well as everything else. To see him in the flesh and wearing the colours. The national anthem. It was lovely. A great occasion.”

Ed came on in the 59th minute as Ireland clinched a hard-earned 39-31 victory.

“He was happy. We got an opportunity to meet him after the game. To win as well. It was a great match. It was on the edge. A nip and tuck affair and I thought both teams played very well,” said Tom who revealed he did get to see his son play at a Rainbow Cup match in the RDS recently. The Aviva on Saturday, however, was really special for a number of reasons.

“We were lucky to have Bryan home after his operation and it was lovely to see both of them together. They hadn’t seen each other for eight months.”

Bryan missed the business end of the season with Bristol Bears and his father revealed he has to go in for another operation and will not be back on the field until around Christmas.

“He is going back today. He had a great year. He is in great form and it was wonderful to have him home for a short time.”

The Byrne family will have their eyes fixed on the announcement of the Irish team who play USA on Saturday at the same venue. Another former Carlow player could be set to receive his senior first cap for his country.

“Hopefully we will have Tom Daly this week. He is flying too and has had a great season,” said an enthusiastic Tom Byrne.