CARLOW’S Aoife Kelly had a fine game as the Republic of Ireland Women’s Under-16s drew 2-2 draw England yesterday at the RSC in Waterford. 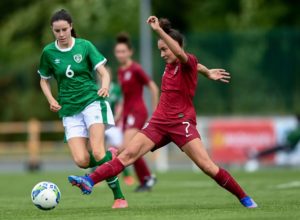 Carlow’s Aoife Kelly closes down Ashanti Ajpan of England during the Women’s U16 International Friendly match between Republic of Ireland and England at RSC in Waterford. Photo: Harry Murphy/Sportsfile

In what was Tom Elmes’ first game as Head Coach, Ireland started well with a clear strategy of moving the ball forward at pace and working together as a unit.

In spite of how little time the players had together, this was an impressive display with Elmes’ approach clear to see in the fluid passing and committed defending.

Ireland took the lead on 35 minutes through Peamount United defender Tara O’Hanlon drifted in a free-kick from outside the opposition’s penalty area and it evaded everyone to nestle in the back of the net.

The hosts held that slender lead going in at the interval, but England hit back with a penalty from Ginny Lackey and a close-range finish from Kiera Barry.

However, Ireland got back level when Aoibhe Fleming smashed in a free-kick from distance that wrapped up a deserved result for both teams.

The teams will meet again in the same venue on Friday at 12pm.