Marcus Lawler is Tokyo bound. On 16 July the plane will leave Dublin Airport for the delayed 2020 Olympic Games and the Carlow 200m sprinter will be on it. It has been a long and challenging last six months for Marcus but the wait is over and he can relax now. 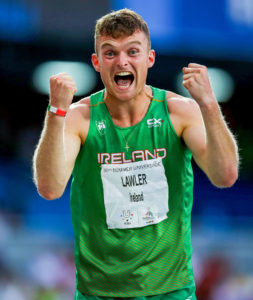 Marcus Lawler will compete in the 200m at the Tokyo Olympics
Photo: ©INPHO/Tommy Dickson

They were the glory years when everything he did just seemed to come easy to him.

“One of my fondest memories in sport was winning the Irish schools title. I won it in what was one of the fastest times in the world for a junior athlete in 2013. I remember after that I was getting calls from here, there and everywhere about sponsorship deals, college scholarships and that allowed me get the (Carlow) scholarship,” he recalled.

“By no means was it straight-forward. I had down years, bad years, bad races. I had good races, brilliant races as well. It has been up and down. The development and the progression of this has led to the Olympics, the pinnacle of sport. The top 56 200 metre athletes in the world are going and I am one of them.”

Over a year ago, he was comfortably placed in the mid-thirties on the rankings table. There was an ebb and flow and while it was unlikely he would come out of the qualifying positions there were anxious times for him.

“I am relieved. It is trying to put back to back performances and checking the rankings. I am relieved. It hasn’t hit me yet. I suppose I am in the mindset that 200m is round one on 3 August and I have one month to prepare for that. Everyday this month matters and I want to put my best foot forward when I get there.”

Team Ireland now consists of 114 officially selected athletes, making this the largest team to represent Ireland yet. There is one remaining team announcement (Judo) which will take place on the 12 July. The Olympic Games in Tokyo will run from the 23 July to 8 August 2021.