CARLOW rower Cliodhna Nolan had her first race in the World U23 Rowing Championships in Raicce in the Czech Republic this morning and she looks looks well placed to have a good weekend. 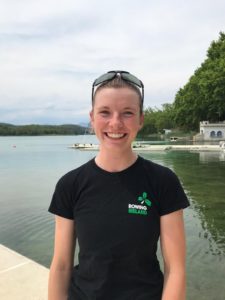 Nolan rowed in the first heat of the Lightweight Women’s Single Sculls and came third behind Aleksandra Fomina of Russia and Femke Van De Vliet of the Netherlands but her time of 8:03.81 would have put her in the running to win either of the other two heats.

Her next race is on Friday morning in the Repechage where she needs a top three finish to qualify for the A/B semi-finals on Saturday.

Nolan has previously competed at the World Under 23 championship in Sarasota, Florida in 2019 narrowly missing out on a medal in the lightweight double sculls, coming fourth.

She came back to capture gold in the European U23 championship in 2020 in the lightweight pairs with her partner Lydia Heaphy.

Nolan continues to show her versatility by competing in her third rowing discipline at a major championship, this time rowing in the lightweight single sculls. Nolan has been rowing in NUIG boat club in Galway for the past four years having begun her rowing career in Carlow Rowing Club.

The Leighlinbridge woman has been on an intensive training camp in Banyoles, Spain for the past four weeks preparing for the championships, with the elite Irish lightweight rowing team, as many of the team prepare for the Olympics in Tokyo.

While in NUIG this year Clíodhna has been very fortunate to have had the help of her brother Oisin as rowing coach, while the NUIG resident coach was drafted in to help with the Irish junior rowing crews. Oisin too has been busy coaching and bringing three crews to the prestigious Women’s Henley Regatta in England last weekend.

The competition will be strong in Raicce at the weekend with crews coming from the USA, Germany, Switzerland, Romania, and Greece among others as 20 different countries compete for the womens lightweight single sculls.

The Carlow native travels to the Czech Republic looking forward to the challenge of her final opportunity of competing on the world stage at U23 level.

Live streams of the events can be seen here.