AS expected, Carlow’s Sam Watson has been confirmed Ireland’s Eventing team for the Tokyo Olympics, following in the footsteps of his father John who was an Olympian at Seoul in 1988. 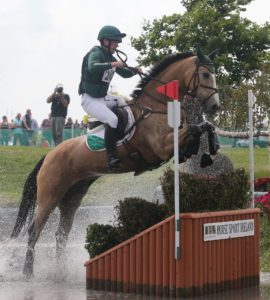 Sam Watson on Tullabeg Flamenco, who will be partners again in Tokyo
Photo: ©INPHO/Lorraine O’Sullivan

Watson and the team secured Olympic qualification when they the team silver medal at the 2018 World Championships – becoming the first Irish team in any sport to qualify for Tokyo.

Watson has competed at three World Championships and the team also includes Ireland’s top-ranked Eventing rider Cathal Daniels and Sarah Ennis who finished fifth individually at the 2018 World Championships. Austin O’Connor, who represented Ireland at two previous Olympic Games, at Sydney in 2000 and Beijing in 2008, has also been selected as P Alternate rider.

Watson is also the Eventing team manager and he said:

“Personally, it’s a huge honour to get the opportunity to represent Ireland at an Olympic Games. I have three World Championships and five Europeans under my belt, but this will be a first Games. It will be something that my own support team and family will cherish, but it’s business as usual for me right now.

“On a broader note, I think Tokyo 2020 is a massive moment for us all. It’s a symbol of our ability to survive and, ultimately, to thrive. Global governing bodies, national sporting bodies and individual coaches, managers and support staff have really put their hearts and soles into making this possible. It’s been the same for athletes too, and it’s seriously tough on the ones that won’t make it there after all their effort, but as someone who now has the chance, I’ll be putting everything into these next few weeks to get a result for the country.”

“It is a huge honour and privilege to be representing Team Ireland at the Tokyo Olympics.  The squad, coaches and support staff have worked incredibly hard to prepare for the challenges of travelling and competing horses on the other side of the world. It is an enormous logistical operation and we couldn’t do it without the great staff in HSI and the fantastic support of the OFI and Sport Ireland.

“With the new format it was never going to be an easy selection and I would like to thank all the squad members for their input and engagement over the past two and a half years. They have really made Eventing in Ireland very competitive and raised the bar.  This will be the toughest competition in so many ways, but we are lucky to have such experienced and professional athletes to call upon.

“You can be sure that we will be going there to do our best and wish to make Eventing Ireland and all our supporters proud of our performances on the world stage.”

The officially selected Eventing combinations for the Olympic Games are:

The Eventing competition at the Tokyo Olympic Games runs from 29 July to 2 August.