A quest lasting seven years ended for Marcus Lawler when the Irish team for the Olympic Games in Tokyo was announced on Thursday.

The Carlow sprinter had known he had been selected but the official announcement wasn’t made until well after that he had been informed. While close family members and friends knew, he had to keep it secret. 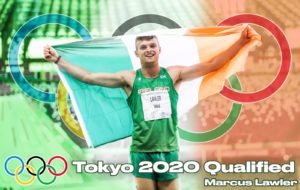 Over the last seven years now, the Tinryland man has always been able to roll with the punches which sporting life throws up. From an elevated ranking position in the mid-thirties before the Games were called off last year, it has been an anxious time of late. There was also the passing of his beloved grandmother, Nana June (Lawler), which hit him and the whole family badly. She was his biggest fan.

“I lost Nana June in March. Daddy’s Mammy. She was mad keen on asking me would I get to Tokyo. When would I be in Tokyo. I hope I will be around to see you. She died in March so she is not around to see me,” said Marcus sadly.

“I found out on a Wednesday (about his selection on the Olympic team) and Wednesday was her birthday. We were down in Castlegregory. She wanted her ashes spread and I found out that day. Wednesday 30 June and the cut-off was the 29 June. I just thought, I don’t know what kind of word to use. There is something about that and it is a pity she is not here to see it. I found out on her birthday, the day we spread her ashes in Kerry,” said Marcus who did well to hold back a tear as he recalled a week full of emotion.

There were two routes which would have got Marcus a place in the Olympics. He didn’t make the qualifying time so he had to get there through the World rankings. The top 56 made it. He was 49th going into the last week with a number of races still up for grabs.

“It has been stressful and anxious watching that world ranking change over the last couple of months. Even years. So constantly keeping an eye on that and making sure you are in the top 56. At the end of the day the top 56 best athletes in the world go and that is it. I am after finishing up at 50 so I am qualified and am going. That is it,” he said

He is 26 years of age now. One of his biggest early disappointments in sport was losing a minor football final to Éire Óg when Tinryland were firm favourites to beat their old rivals. It was around that time he had to make a decision and football, which he loves, had to go.

In 2013 Marcus smashed the 30 year old 200 metres schools record recording a time of 20.87 seconds. That day in Tullamore he also won the 100 metres and recorded a glorious treble when anchoring the Carlow CBS team to gold in the 4 by 100 metre relay.

Now here he is and on his way to Tokyo.

“I have qualified for the Olympics, the pinnacle of sport. I think the journey all started in first year in college. Probably seven years ago now. That is when I met the sports officer in Carlow. I met Mick Dempsey. We talked about strength and conditioning. Training programmes and different things. This was a long term project. It has happened now. I think that is where it really started.”

For a couple of years he could do no wrong. Then he hit a few stumbling blocks.

“In 2015 I ran 0.2 a second off the qualifying standard for Rio 2016. Going into that year I was saying I can improve by that 0.2 no problem. I didn’t. I didn’t qualify for Rio and I had it in my sight that I could but I didn’t. I was 0.2 second too slow. I had it in my mind then I could have another crack at this. It has come through now,” he recalled.

Elation and disappointment have accompanied the Carlow man for many years now. Some sportsmen doubt themselves and threaten to give it up. There was never a time Marcus felt like throwing it all in. He was focussed on competing at the Olympic Games. There were many discussions with Patricia, his mother and his coach.

“After bad performances you have to go back and have a serious chat. There has been an awful lot of figuring out.”

Even in Olympic year when most of the hard work had been completed, they had to review some of his races. His coach was unable to attend the nationals because of Covid and the restrictions.

“After indoors this year I had a poor indoors. I came out of the track after that. She (Patricia) saw it in the stream. There was one particular part of the race where you wondered why is this happening. What do we need to do to fix it? Where do we go from here?

“Essentially we come home, pull out the folders, the training plans, we write things down, we pull our hair out, we have discussions with my gym coach, my technical coach, other coaches.

“It is head wrecking. It is just about finding out why things go wrong and how we can improve. It goes on for days as it goes around in your head. There comes a time you have to park it and trust the plan. Rewrite the plan to try fix the wrongs and go again. There have been many. I had a disappointing national final this year. I lost my form and my rhythm coming down the home straight after putting myself in a good position. I seemed to lose all my flow and my rhythm.”

That was only two weeks ago. Losing to Leon Reid was disappointing but he was denied silver by Raheny’s Mark Smyth. That sort of run was not expected and he had to deal with that.

The following Tuesday he was in Switzerland for a meeting which went well enough for him.

“I was second in the B race. I had to be there to beat some guys which I did do. Time wasn’t anything special. It started to hailstone during the race. I did my job, filled a lane and beat the guys I had to beat.”

Going back to earlier in the year, he changed clubs leaving St Laurence O’Tooles and is now running in the Clonliffe Harriers colours.

“Again, without getting in and outs and there are no ins and outs, it comes back to decisions we make to help better myself in Olympic year.

“I am always looking to get better, to be more ambitious and that was the reason behind it. I am also training in Dublin quite a bit and that was another reason. It made sense for me to join Clonliffe Harriers. It is essentially about joining a bigger club, to set higher standards and be better. Every single decision I make is to how to get to Tokyo and this was one of those decisions that I had to make and do which I did. I was very happy in the Nationals. Obviously, I would have liked a different colour medal but I am very happy in their singlet.”

Despite the move he still has his team behind him.

“The training base at IT Carlow. You need facilities. In IT Carlow I have them there. The new South East Sports Campus. The new track. It is unbelievable. It is class and I am lucky enough to be allowed into that.

“I train in the Institute of Sport at Morton Stadium as well. The college have been a massive help to me. I am the Ambassador for Athletics in there and they have supported me right the way through. Even since I have left the college.”

Training partners have been ever present.

“Lads like Stephen Gaffney. The local guys here, Adam Murphy and Shane Webb. That is our training group. We train together. We have done it together. We turn up at the track together. There is a lot of local support as well. Text, calls, support on social media. None of that goes unnoticed. Joma Sport is my sponsor. Cullen Motors have supported me as well. I don’t want to leave anyone out,” he stresses.

Marcus is a member of the Olympic Federation of Ireland schools programme, Dare to Believe, which aims to inspire young people to believe in themselves through an interactive curriculum that explores the Olympic Values using Team Ireland role models to bring the messages of life. He is also the IT Carlow Athletics Ambassador.

Then there is Muireann his girlfriend who has been with him through thick and thin.

“She is brilliant. I go away a lot and she obviously cannot go away with me. She is very excited, very supportive.”

His father, Tom, and Patricia and his brother and sister have watched, helped and encouraged him.

“Mammy and Daddy have been a massive support since day one. The one supporter which still gets to me is Nana who is not here. I was very close to her and that is the supporter who won’t be there unfortunately. Hopefully I will be able to do her proud in Tokyo. She was a major support, loved watching it, loved going to the races and she was very much in touch with it right the way through.”