SAM Watson’s selection to represent Ireland in Tokyo means he joins a small list of father and son combinations who have represented their country at the Olympic Games.

Tinryland based John Watson represented Ireland in the Equestrian discipline at Seoul in 1988. Now his son, who also lives in Tinryland, is set to follow in his footsteps. Having flown out to Germany on Sunday the Irish team have already left Ireland for the games. As part of their preparations the horses have to go into quarantine and will also undergo some standard health examinations. In Germany, the Irish team will fine-tune their preparations. 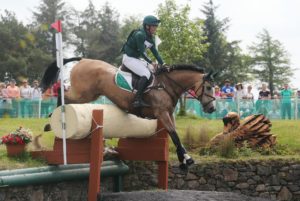 The squad will then leave Europe on 19 July, arrive in Japan the next day and will start competing on 30 July.

The Carlow man confesses he is fulfilling a life-time ambition to play a full and active part in the Olympic Games. It hasn’t been an easy journey for him.

“It is in the blood. My Dad, John, went to the Olympics in 1988, The same sort of thing. Eventing. I think I chased it a bit more when I was a bit younger and it didn’t really work out for me for London and for Rio in 2016. I was even on the fringes in 2008 but I would have been very young for our sport back then,” he recalled.

Since 2002 he has lived in Carlow near Ballyloo Cross, between Nurney and Tinryland, while he also spent six years of that time in England learning and working on acquiring his equestrian expertise which he is putting to good use now.

He has been at three World Games and five European Championships working and training extremely hard to get to this level. In some reports, it was said he is to captain the team in Tokyo but he says this is not the case pointing out the four members of the team are all equal.

His Olympic participation is tinged with sadness. He was close to 15 year old Tiggy Hancock who lost her life in a fatal fall off a horse while training at Rathcoole in June. She was a rising star in Irish Equestrian and was well-liked within and outside the sport. Her passing hit Watson hard.

“She is from Carlow. She was a part of our team. I coached her. One of her Teddy’s is coming out with us. It will be very special for her. My goal was always to inspire a young talent like Tiggy and it is a bit of a cruel twist she is the one that is going to be inspiring me. She will be with me in thought and in spirit I’m sure,” said Sam.

On the final day of Royal Ascot this year, all the jockey’s wore a yellow ribbon in memory of the young Irish equestrian star. Watson says this was so appropriate

“We actually have the only yellow horse that will be in Tokyo. My lad Tullabeg Flamenco is a Dun horse, golden in colour which is very rare and unique. It is a nice touch and will mean something,” assured the Olympic bound 35 year old.

In his younger days, Watson was consumed about winning a place on an Irish Olympic team. For over twelve years it didn’t happen. Then he married Hannah (known to everyone as Sparkles). They have two children now. He is also self-employed and Sam says it was the change in emphasis in his life which has made him a better rider and a better person.

“I became a Dad in 2013 and have started a business (Equi-Rating), a data analytical company. A lot of our data and software will be used by managers. So I guess the point is in the last five years I have probably competed as an athlete, I would say a part-time athlete. I think having the family and having the business gives me a lot of other things to focus on. To be honest that may have improved my performance,” he speculated.

“As a younger guy, who thought about nothing else but going to the Olympics, it didn’t happen for me. I think I put too much pressure on myself. You know, you can try too hard. That is what was happening. It is all falling into place now and it is pretty special. He says it would not have happened without his wife and her input. Sparkles was an excellent rider in her own right and is the travelling groom for Tullabeg Flemenco.

“It is like she is the mechanic and I am the driver. The two of us are a team. She does 80% of the work and I get 80% of the credit. It is important she gets her name up in lights as she is a huge part of the team,” stresses Sam.

They have two children who, like their parents, have grown up in the sport. The parents will miss the birthdays of their children while they are away.

“Archie (7) and Toby (6) but they will be eight and seven by the time we come back. Archie is the 19th and Toby the 20th of July. A year and a day a part, we will be flying to Tokyo for much of the day of their birthdays.

“They are very grounded children. They have had to grow up with us being on the road an awful lot. It has been a part of their lives growing up as well. I have to say the pandemic for most athletes has been a really tough time, a disruption to their preparation and everything but for myself and Hannah we actually got to take our foot off the gas a little bit and enjoy time with the kids,” Sam explained.

The State of Emergency which has been imposed in Japan means the games will be played in empty stadiums. He is not feeling sorry for himself but empathises with those people who would have had plans to go to the Olympics.

“For me it is a privilege and an honour. I am very grateful the games are going ahead at all. You have to be very respectful of the Japanese people and the Japanese government. We are very lucky to be there at all. It is an awful shame for the people who want to be out there spectating. We are living in a world of sacrifices at the moment and that (spectators not seeing him perform) is a small one I think.”

The Olympic village is only a half-hour away from the Equestrian Arena and is quite central.

The three disciplines are Show jumping, Dressage, Cross-Country. Watson says he has done particularly well in the Cross-country.

“It is our show piece. It is where the speed and the bravery comes in. It is a phase I have probably been stronger in. I enjoy it, I enjoy working it out. I have made a few mistakes in championships in the past and small mistakes I won’t want to make again. That is all part of the learning and part of getting to where you are going. You have to make mistakes along the way,” Watson reasons.

The Carlow rider has enjoyed some notable successes over the last year. In June 2020 he partnered Imperial Sky when winning the individual award in a top-class eight nations Team event at Camphire in West Waterford. The horse would have gone to the Olympics but fate ruled otherwise.

“We had him in line and was probably front-running for the games at the start of the year. He just picked up a minor injury which can happen any athlete but he will be back on the scene next year. It ruled him out of this year,” says Sam while pointing out his current mount has been ticking all the right boxes.

“I have to say Tullabeg Flamenco, who is the horse that is going out there, he stepped up a lot and produced my PB score on him this spring. He is in form. We are in form and that is good.

So all the preparation from an Irish point of view is complete. The journey from Carlow to Japan is underway. Can Watson and Ireland medal at the games?

“The team is about 5-1 shot to win a medal. I know that because I do the analytics on it. We are not favourites but we have a real chance. That is what you need and we will be doing everything we can to maximise that from now till then.

“It would be special. We have had a rough month with Tiggy and if we make her proud and make Carlow proud I would be delighted,” says the latest Carlow Olympian.