OLD Leighlin wrote its own little bit of history recently when it became the first community in the county to complete an energy masterplan, which will help make it energy efficient. The village secured grant aid for the plan and a local group put tremendous efforts into the project, which was launched two weeks ago.

It’s been several years in the offing, and following several workshops and community consultations, the people of Old Leighlin came together and held a public information meeting, which was very well attended. The local group worked in collaboration with Carlow County Development Partnership. Assistance was also provided by 3Cea and Planenergy Consulting to complete the masterplan, with grant aid of €10,000 received from the Sustainable Energy Authority of Ireland (SEAI).

The energy masterplan surveys and documents the community’s energy consumption and will also highlight buildings and areas where alterations and improvements can be made to upgrade energy efficiency, reduce carbon emissions and reduce consumption. This will enable members to carry out necessary upgrades, where possible, thereby reducing their energy bills.

Some might look at as little as changing light bulbs to start with, while others might make major changes such as a full retrofit. In time, it may examine how the community can generate its own electricity with renewables.

Alice O’Leary, a committee member from Old Leighlin, said: “There is an energy challenge we are facing. It’s becoming a topic for a lot of people. We see this as growing into a community-led process to make energy savings understandable and accessible to local householders.”

The committee features Marian Meaney, Anne Honeyball and Seamus Hayden, but its numbers are growing, with more people becoming involved and sub-committee groups expected to be established. The next step is for representatives from local areas to relay information in the community.

There is great pride locally that Old Leighlin is the first Carlow community to establish a masterplan. 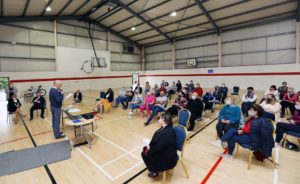 Seamus Hayden addresses the gathering during the launch of the Old Leighlin energy masterplan in the community hall
Photos: Karl McDonough

“When we set out on this, we thought we’d never do that,” said Alice. “When Covid hit and Zoom meetings, it took some momentum out, but we are very proud to have done this and be the first in the county.”

The Old Leighlin committee is very grateful to Carlow County Development Partnership for its support at every step.

Alice added: “The support from the community and from Carlow Development at each and every step made the difference. They supported and enabled us to focus on the next step rather than get overwhelmed by the whole project, which still seems enormous to us. I have to say that while the detail required for the application worried people within the community at the start, bit by bit we found the confidence to keep going.”

She added that water conservation and biodiversity training programmes were provided, which were also facilitated by Carlow County Development Partnership through LEADER funding.

Marina DeCosta of the development partnership extended her congratulations to the people of Old Leighlin.

“The journey was long and hard. Sometimes it felt we would have to take a step back, particularly in light of the complications and hurdles that were created due to Covid,” said Marina. “However, the resilience and determination of the committee, along with our partners 3Cea and Planenergy, overcame a multitude of barriers. Old Leighlin can proudly take ownership of the very first energy masterplan (EMP) to be launched in Co Carlow.”

Old Leighlin’s EMP has been developed by looking at energy in as many aspects as possible – community buildings, businesses, farms and private residences – and how changes can be made to conserve energy and reduce costs. Guided by the EMP, local people can decide how they can all conserve energy in ways that suit all pockets.

Following on from initiating and progressing the EMP for the village, Old Leighlin explored different ways in which it could enhance and preserve its beautiful landscape to continue to maintain its natural ambience in a sustainable manner. This includes the fundamentals of promoting energy efficiency, water conservation and quality and biodiversity.

With support from Carlow County Development Partnership, Old Leighlin Community Hall and Old Leighlin Tidy Towns, local residents were able to access expertise and know-how to reflect on the value of what was present in their village and learn how to protect Old Leighlin and their natural resources into the future.