Carlow family’s heartbreak at the death of ‘superhero’ Ethan 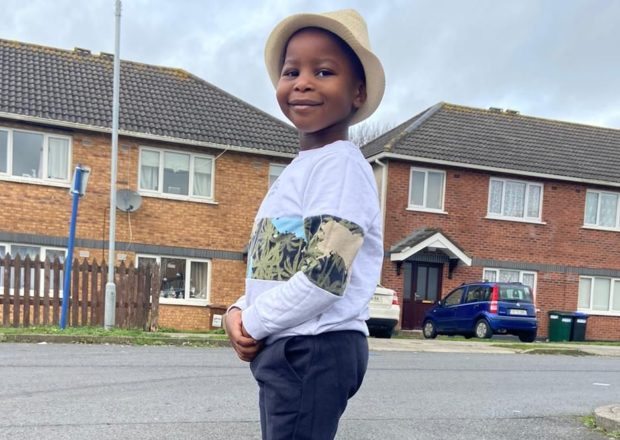 A FAMILY and community are in mourning following the heartbreaking death of six-year-old Ethan Kabia.

Ethan from The Laurels in Carlow town passed away on Friday after a brave battle with lung cancer. He was described as a “superhero” by his adoring parents Amanda and Jethro.

Amanda said: “He was a superhero. He was the light of the family. He made everyone laugh, helped everyone. If there was a cup left down, he’d pick it up. He wanted to please Mummy and Daddy.”

Jethro added: “He was a gentle guy, very caring. In school he was looking out for other people. If there was any fighting, he’d offer his things. He was very athletic, loved to climb, loved swimming, loved animals.”

Ethan was the second youngest in the family and was beloved of his siblings Elam, Hope, Princess, Brendan and Jethro Jnr.

Ethan, who was in junior infants at Gaelscoil Cheatharlach, had been diagnosed with cancer a year ago. He and his family had been up and down to various hospitals and had received radiography. The cancer spread to his legs and made it hard for him to walk, but Ethan remained strong.

“He had a sarcoma and in the position it was in there was nothing they could do,” said Jethro. “Ethan never gave into it. He fought it with everything. It has been very difficult … believing and hoping and relying on God.”

The family had sought to fund alternative treatment and received support from the community, their church, friends and family, but unfortunately it was not to be.

“He was the light, and the light has been taken away,” said Amanda.

Ethan’s family would like to thank everyone for their support over this difficult time, and especially the Laura Lynn Hospice and the nurses in the children’s ward at St Luke’s Hospital, Kilkenny. The family have also received great support from Pastor Francis and Victoria at the Grace Family International Church in Carlow.

Gaelscoil staff visited Ethan at home when he was ill and there was an open invitation for the youngster to come into the school at any time.

“Whenever we’d go for a drive, Ethan would ask ‘can we drive to the school’?” said Jethro. “We did go in one time and his classmates were really amazing, telling him how much they had missed him and wished him back to school. He never forgot that. His wish was to go back to school.”