DURING the recent Euros soccer finals great play was made by the English media and fans that the beautiful game was ‘coming home’ to where it originated in London in 1863. As we all know that all ended in tears for England when Italy proved to be the party poopers in the Wembley final.

A far more positive outcome has resulted for a Carlow sporting family as a precious medal won exactly 77 years ago this week – July 20, 1944 – has ‘come home’ from London, where it has been kept in safe keeping for more than 70 years!

The background to the story centres on the late John ‘Buller’ Moore, one of the outstanding crop of footballers that Carlow produced in the early 1940s, the greatest era in the county’s football history.

‘Buller’ played at right half forward throughout the Leinster senior football championship of 1944 as Carlow went on to claims its lone provincial crown with a 2-6 to 1-6 final win over Dublin in Geraldine Park, Athy.

As an O’Hanrahans clubman Buller won a number of county senior football championship medals with the Blues, at a time when the townsmen and Tinryland were top dogs in Carlow football.

But, of course, the Leinster medal of ’44 was the jewel in the Moore sporting crown.

John Moore was born at 23 Pollerton Road, Carlow and, following his marriage to Sadie Fleming from the town’s St Patrick’s Avenue, they lived in 200 Pollerton Road throughout their married life. They had four children, two boys, two girls – the late  Tim,  Michael (Mick), Marian and Rose.  Tim, a life-long Blues supporter, died in 2013, aged 65.

The name ‘Buller’ was attributed to John when, the story goes, he kept a dog of that name and the mut’s name simply stuck to him.

‘Buller’ worked in the Carlow sugar factory as a crane driver but, sadly died in 1959 a young man, aged 40, having fallen seriously ill and being treated as a patient at the former County Infirmary, on Old Dublin Road, Carlow. Wife Sadie passed away in 2002.

Before his death Buller bequeathed his Leinster medal to his sister Alicia.  In the early 1960s  Alicia emigrated to London, keeping the medal in safe keeping down the decades.

Buller’s son Michael (Mick) Moore, who resides at Heather Hill Park, Graiguecullen, often spoke to Alicia about his father’s medal, always holding out the hope that she would give him the  precious  piece of sporting jewellery. She did not give him  the  medal but did assure him that one day this  gem  of Carlow sporting gold dust  would be his.

Alicia married in London, her married name being Wood. Time passed and she died at Christmas 2019 in her 90s, at which time Buller’s medal passed into the possession of her son, Kevin.

Mick, winner of six Carlow SFC medals during the 1970s and 1980s with Éire Óg as a talented, pacey, intelligent wing half forward, just like his dad, told The Nationalist: “When Alicia died the medal could easily have been thrown out in the skip. But, happily, this did not happen. It was in conversation one day about a year ago with Pat and Pauline Murphy in St Mary’s cemetery, Carlow that the matter of the medal came up in conversation. Pauline is the former Pauline Harvey from Carlow.

Mick continued: “I said I would love to get my father’s medal. I was unaware of the whereabouts of Alicia’s son, Kevin so Pat undertook to try to make contact with me. The Harvey family were neighbours of Alicia’s when she lived on Pollerton Road.

“Matters took off from there. Fair play to Pat Murphy, he did make contact with Kevin and, with Corkonian Pat acting as the man-in-the-middle, the medal was given to him to be handed over to myself.”

Mick was playing golf in Carlow last week when he received a mobile phone call from Dermot ‘Nudger’ O’Boyle to say that Pat and Pauline, Dermot’s sister-in-law, wished to see him at the Dolmen Woodford Hotel. That proposed meeting did not work out even though Mick went out to the hotel.

So, through the good offices of Dermot’s wife, Veronica, the Murphys then made their way to the car park of the Talbot Hotel. They rang Mick Moore at home and he went down to be handed over his father’s Leinster medal from 1944.

Mick is really chuffed to have the medal back home after over 70 years of residence in London, bringing to an end a wish going back to childhood – he was aged six when his dad died. 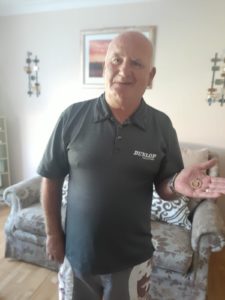 The 68- year-old commented: “There was only about 23 of the medals presented in 1944 to the Carlow team and substitutes in what was a one-off achievement for the county’s footballers. These players were heroes to the people of Co Carlow and were treated as such on their return to the county with the Leinster Cup.

“So people will appreciate my father’s medal is something special that will take pride of place in the Moore household, providing a constant memory of what he achieved as part of the great Carlow team of 1944.”

Mick extended sincere thanks to Pat and Pauline Murphy, Dermot and Veronica O’Boyle for their involvement in bringing the medal home.

It was Dermot O’Boyle who alerted me to the story of the Moore medal. He is a man with a keen eye for any story with a sporting theme, particularly when it refers to a Carlow sporting personality, past or present.