IT’S not too often that a player scores a hat-trick of goals in Championship football, and it’s even rarer for that to happen and that player still end up on the losing team but that’s the fate that befell Carlow’s Cliodhna Ní Shé at Netwatch Cullen Park today against Wicklow in the All-Ireland Junior Football Championship. 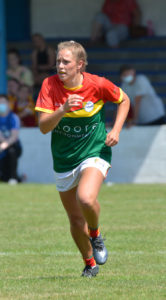 Carl0w were chasing the game from the early stages and they went in at half-time trailing by 2-9 to 0-4, but Ní Shé’s brilliant treble brought her team right back into contention.

She scored her first goal just a minute into the second half and then converted a penalty three minutes later to bring Carlow within five points. However, that was as close as Carlow got with Wicklow soon re-establishing their dominance but Ní Shé completed her remarkable feat of scoring by scoring her third goal late in the game, to go along with two points that she scored.

In the end, Wicklow ran out 3-15 to 3-7 winners despite a spirited second half performance by Carlow and Ní Shé inspired shooting.

See Tuesday’s paper for a full report and reaction from this game.