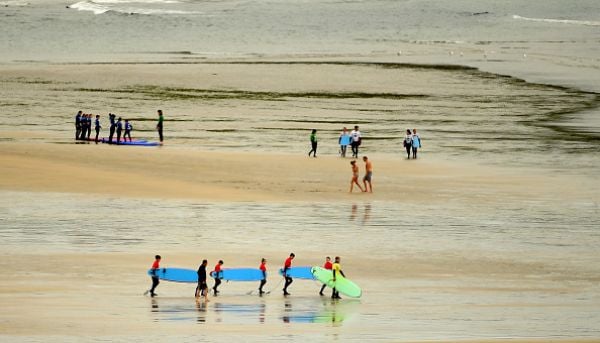 The mother of a young girl rescued from the sea in Co Clare yesterday has thanked the local man who saved her life.

Patrick Mungovan, a lifeguard and swimming instructor at his family-run Quilty Cottages in Co Clare, rescued 7-year-old Leah after she got into difficulty while swimming at Seafield near Quilty.

The youngster’s mother posted a message on Facebook thanking Patrick for his heroic efforts after he saved the child from drowning.

Julie Peters said on Thursday: “Yesterday while at Seafield pier with my daughter, she got into difficulty in the water and was rescued by a heroic young local man by the name of Patrick Mungovan.

“Patrick is an absolute hero and deserves recognition for his actions. He is a trained lifeguard from Quilty who happened to hear my cry for help and saved my baby girl.”

In her Facebook post last night, Ms Peters said: “We are visiting the area for a few days with my 3 kids from Limerick who were excited to visit the beach. My daughter Leah, aged 7, slipped into the water and unable to reach the bottom, she started to panic fast. My worst nightmare was unfolding in front of my very eyes as my daughter struggled for what felt like forever.

“This young man heard my scream for help and without hesitation came running towards me and entered the water immediately even with his iPhone and car keys still in his pocket. It all happened so fast,” she said.

“He reached Leah and brought her back to safety. She cried and clinged [sic] to Patrick for dear life as he lifted her from the water and back to dry land. I will never forget the fright to see to see my 7 year old daughter so helpless and scared. It could have been a different outcome tonight had this man not been there to help Leah,” she added.

“Leah has been examined by a doctor who said she was very lucky and could have started to intake water to her lungs had she been struggling in the water any longer.”

Ms Peters said she wants to ensure the story of this rescue reached as many people as possible so that parents would understand the dangers associated with children swimming in the sea.

“To parents out here, keep both eyes on your kids at all times. Even a split second can mean the difference between life and death,” she said.

“Please share to help others to understand the dangers of how quick this can happen and share the name of a hero who will always be remembered in our house. Patrick, I will never be able to thank you enough for saving my daughter’s life,” Julie added.

Mr Mungovan’s own Facebook page has been inundated with congratulatory messages after his heroic rescue.

One message said: “Very grateful & proud of my cousin, Patrick Mungovan. His quick efforts and lifesaving skills without thought for himself are an inspiration & signature of his very essence as a man. Tragically, his twin brother Stephen lost his own life to a tragic drowning incident a few short years, ago. Love & gratitude for you, Patrick!!”

Mr Mungovan said on Thursday: “(I) just happened to be in the right place at the right time and heard the woman crying so offered my help. Glad the little girl is safe.”

Mr Mungovan lost two brothers to tragedy including his twin, Stephen, whose body was recovered from the sea three days after he fell from a cliff near his home in 2015. His brother Michael died in 2000 after being struck by a train while working on railway tracks in London.