Concern over rise in family homelessness as total figures return above 8,000 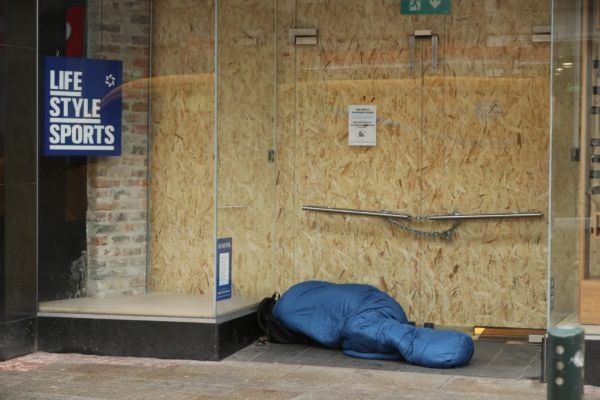 Homelessness groups have said they are “deeply concerned” about a new rise in family homelessness in Ireland.

Figures released today by the Department of Housing show the number of people experiencing homelessness returned to above 8,000 in June.

The increase saw 23 more adults and children recorded as homeless, bringing the total figure to 8,014.

The increases fell most heavily on Dublin, where the number of homeless adults rose by 15 to 4,069 and the number of families rose by 14 to break the 700 threshold again at 702.

Outside the capital there were 412 homeless adults in Cork, 218 in Limerick and 62 in Waterford.

Anthony Flynn, chief executive of Inner City Helping Homeless (ICHH), said the country was “moving into a trend of increases across the homeless spectrum.”

“What’s worrying is… an increase of 123 per cent in families entering homeless for the second quarter on the same period last year,” he said.

“With restrictions being lifted and an increase in eviction notices now being sent to tenants we will continue to see more enter homelessness in the coming weeks and months… We must have a plan in place coming into the winter months.”

Also responding to the figures, director of advocacy at Focus Ireland Mike Allen said the increase in family homelessness in June “is a stark reminder of how precarious the progress in tackling homelessness really is.”

“In the last year and a half we have seen great progress reducing the overall figures, but this was a result of an immediate response to the pandemic with welcome measures like the eviction moratorium rather than a long-term plan,” he said.

“We have to remember that, even with the recent progress, the number of families homeless remains four times the level it was in 2014, when the then Minister for Housing declared it an ‘emergency crisis’.

“The Government has decided not to continue many of the policies which cut family homelessness – such as greater protections against evictions – and the underlying causes of the problem has not been addressed, and must be in the Government’s Housing for All strategy.”

Mr Allen said Focus Ireland services across the country were reporting households experiencing increased financial stress as the economy reopens, “which is leading to families being on the verge of homelessness.”

He said people can show their support for the #FocusOnFamilies campaign by contacting their local TDs on the issue through its campaign page.