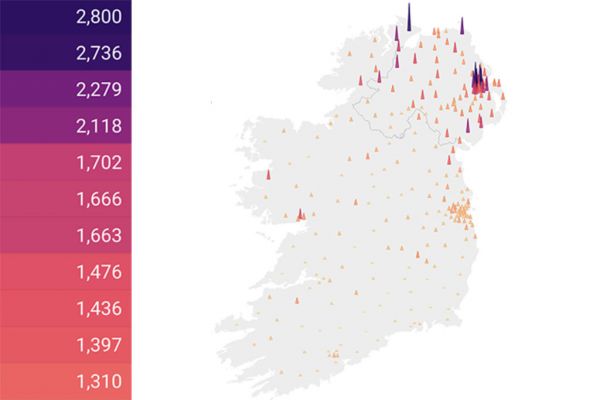 Almost one in every 35 people in Carndonagh, Co Donegal had coronavirus over the last two weeks, according to the latest official figures.

The most northerly local electoral area in Ireland has the highest rate of Covid-19 on the island with an incidence rate of 2,800 infections per 100,000 people. This has increased sharply from last week when the area had a rate of 1,975.

The next worst affected region is Belfast, with three postcode areas in the city reporting infection rates of more than 2,000 cases per 100,000.

Hospitals in Belfast came under “extreme pressure” at the weekend because of an increasing number of Covid patients. The Belfast Trust, which runs hospitals in the city, called on nurses to work later on Sunday and overnight to help ease the pressure.

The figures are based on the number of new cases in the Republic’s 166 local electoral areas and the North's 80 postcode areas over the most recent two-week period.

The update comes as Taoiseach Micheál Martin said that the Government will take a “steady as she goes” approach to Covid-19 restrictions in the coming weeks.

He said that while the vaccination programme was making good progress, the Delta variant meant that a cautious approach is needed.

Chief medical officer Dr Tony Holohan said the country has to continue to drive up vaccination rates “as high as possible”.

“The higher we go, the better the protection we have and the sooner we’ll be able to ease more of the economic and social restrictions that still remain in place,” he said.

Meanwhile, the North’s chief scientific adviser has warned that the region could be facing a more severe wave of Covid-19 than other parts of the UK due to its flagging vaccination rate.

Speaking on Thursday, Professor Ian Young said there is concern that people in the region appear less willing to get a jab than those in Britain.

He also said that increasing case numbers in the North may have “plateaued” in recent days, while the numbers in hospital, including in intensive care, are currently a third of those witnessed in previous waves.

Given the drop in case numbers, Prof Young said he expected inpatient numbers to “stabilise” towards the end of next week.