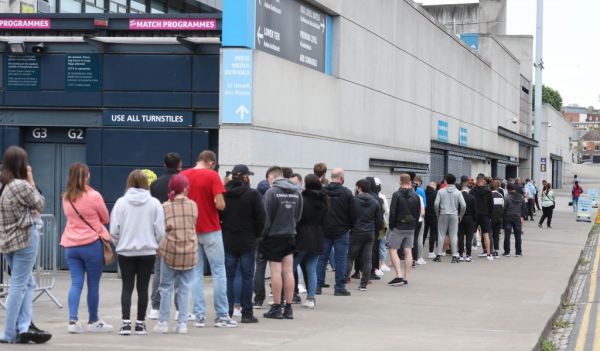 The chief of the HSE has hailed an “inspiring” weekend for Ireland’s Covid-19 vaccination programme as over 18,000 people attended walk-in centres for the jab.

People of all ages attended walk-in centres this weekend, he said, with 50 per cent of attendees aged between 16 and 17, and 64 per cent aged 19 or under.

The clinics are continuing today at 26 locations across the country, with the service open to anyone over the age of 16 who has yet to receive their first dose.

An inspiring weekend for the vaccination programme. Over 18,000 people have availed of Walk In Centres so far. Continuing today in 26 locations. People of all ages attending, 50% aged 16-17 years old & 64% 19 or under. Approx. 2.1M vaccines administered in just 6 weeks. @HSELive

Long queues were observed at many walk-in centres over the weekend, with Mr Reid saying the walk-in initiative would be used again, but not on such a widespread scale as the bank holiday weekend drive.

“Due to the success of it we are looking at how we will utilise it now going forward,” he told RTÉ.

Mr Reid said on Monday that the registration portal for the State’s 280,000 12 to 15-year-olds is expected to open this week or early the following week, according to The Irish Times.

The Government is finalising plans for an information campaign in the coming weeks to address any concerns that parents of children in this age group may have.

Mr Reid said the model for this cohort would see vaccines mainly given through GPs and pharmacies, with some at vaccination centres.

The HSE was aiming to vaccinate the vast majority of that population in August with the second vaccination in September.

Mr Reid said he was still concerned at the rise in hospitalisations. He said as of Sunday night, there were 171 Covid patients in hospital with 26 in intensive care.

Some 22 per cent of those in intensive care were vaccinated and 78 per cent unvaccinated, he added.

However, Mr Reid said there was no major change in the age cohort with the majority of those in intensive care – 22 – being over 50, and the remaining four aged between 19 and 30.

On Saturday, Taoiseach Micheál Martin said 72.4 per cent of adults were fully vaccinated in Ireland.

Ireland also reached another less positive milestone as the number of cases reported in the country since the pandemic began hit 300,000, with a further 1,098 infections reported on Sunday.