MARCUS Lawler made his long awaited Olympic debut in Tokyo in the early hours of this morning in Heat 6 of the 200m and marked the occasion with a season’s best time of 20.73 but unfortunately that wasn’t enough to qualify for the semi-finals.

Lawler put in a strong bend and closed well on the athletes in front on the home straight to give himself an outside shot of qualification but it wasn’t quite enough. He was pleased with his run and delighted with his Olympic experience but slightly disappointed that he wasn’t able to put himself in with a shot of reaching a semi-final. 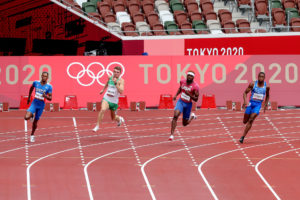 Marcus Lawler takes the bend in the 200m heats at the Olympic Games in Tokyo
Photo: ©INPHO/Bryan Keane

“It’s better than I have done all year and to run a season’s best out here is obviously good but I’d really love to be contending for a semi-final. To do that I knew that was going to require a 20.5, and I’m capable of 20.5 but it was just shy of that. I am really proud but at the same time from a performance point of view you’d want to be that bit better and get into a semi.

“My year hasn’t been fantastic if you are really honest, there is no way of dickying that up. I tried to work on things that we thought were going wrong in the camps out here and to produce my best this season is good. I think I fixed some of the things we were working on but that wasn’t quite good enough to qualify for a semi, which honestly is a little bit disappointing. But at the same time I am really proud of myself,” said Lawler.

Speaking of his approach to the Games he added: “I’ve enjoyed every last minute of it and that’s what I really wanted to do. Come out and enjoy it, relax, and run free without being tense and hopefully, I achieved that. I’ll look back at the video and really know but I’ve enjoyed every minute. It’s the Olympic Games, it’s the pinnacle of sport.” 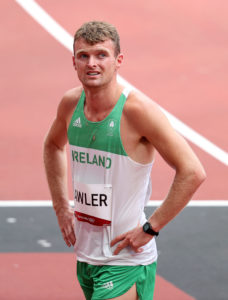 Marcus Lawler after his 200m race at the Olympic Games in Tokyo
Photo: ©INPHO/Bryan Keane

Next year is another big one for athletes with the European and World Championships and Lawler’s mind is always drifting those, with the next Olympic Games in Paris in 2024 also in his sights.

“I’m in this for the long haul. I’ll still turn up year in, year out. I’m always looking to the next target and that’s going to be the next target. Short term, I want to race on this year and be better but yeah, definitely, long term the Europeans and Worlds next year. Then, it’s about figuring out how to get to Paris for the next Games and figuring out how to get the semis next time. I’m in it for the next while anyway.”