Covid hotspots in Ireland: How many cases in your area? 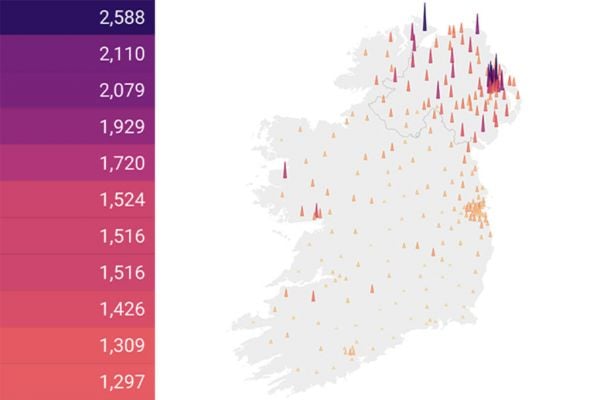 The North and Co Donegal have the highest coronavirus infection rates in Ireland, though cases are also rising in parts of Co Mayo, the latest official figures show.

The most Covid-infected region on the island is Belfast, with many postcode areas in the city recording incidence rates above 1,000 cases per 100,000 over the latest two-week period.

The BT3, BT13 and BT12 postcodes, which cover part of the city centre and west Belfast, have the highest infection rates, while cases also remain high in the Ardoyne area of north Belfast.

Hospitals in the North continue to struggle with rising Covid pressures.

Last week the Belfast Trust apologised after a number of scheduled cancer surgeries were cancelled in order to free up staff to deal with increasing Covid inpatients.

The pressures continued at the weekend when the trust was unable to accept donated kidneys for life-saving transplant operations as the surgeries could not be carried out without sufficient staff.

In the Republic, Carndonagh in Co Donegal is the local electoral area with the highest rate of Covid-19, with an incidence of 2,110 cases per 100,000 people. This has decreased from last week when the area had a rate of 2,800.

The figures are based on the number of new cases in the Republic’s 166 local electoral areas and the North's 80 postcode areas over the most recent two-week period.

It comes amid high demand for the Covid vaccine in the Republic, which has the second highest uptake rate in Europe after Iceland.

More than 3.1 million people have received at least one dose of a Covid vaccine, equivalent to 85 per cent of adults.

More than 2.8 million are fully vaccinated, which is approximately 75 per cent of adults.

Some 90 per cent of the population aged over 16 have registered to get a vaccine.

The online registration system for 12 to 15-year-olds will open next Thursday, August 13th.

New figures from the HSE show that 75 per cent of cases in the last two weeks are in people under the age of 35, with most cases in the 19-24 age group.

Niamh O’Beirne, the HSE’s national lead for testing and tracing, said the positivity rate in testing centres is about 12 per cent and continuing to rise.

Ms O’Beirne also said that since the reopening of hospitality, there have been outbreaks in hotels and different accommodation settings.

“It’s not excessive and they are managing them,” she added.