Ministers to push for return of First Communions and Confirmations 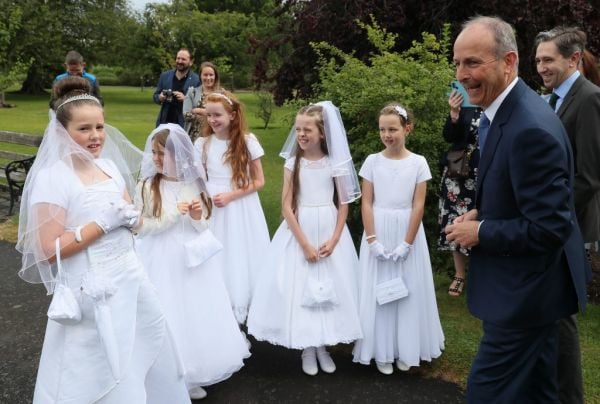 Several Government Ministers are to push for the resumption of First Communions and Confirmations under Covid-19 guidelines.

The move comes as controversy continues over a perceived inconsistency in the public health guidelines surrounding gatherings, according to The Irish Times.

The Government said certain outdoor events with up to 200 people were permitted, under advice from the Attorney General, in a statement released after an event in Dublin’s Merrion Hotel organised by former minister Katherine Zappone.

Officials from the Department of Tourism and Fáilte Ireland met on Thursday to discuss the guidelines, and it is expected that they will now be discussed at a meeting of the Cabinet Covid-19 subcommittee today.

While sources have said a return of Communions and Confirmations is not officially on the agenda for the meeting, a number of Ministers are now pushing for new guidance for the ceremonies.

A senior source said there is now a “strong case” to be made for setting a date and allowing the services to recommence.

A planned restart date of September has been indicated by sources, but any change is likely to require full Cabinet approval.

A number of Catholic bishops have already given the go-ahead for the ceremonies to take place later this month, in defiance of the current guidelines.

Asked about the controversy over the Merrion Hotel event, chief executive of the HSE Paul Reid has appealed to people to avoid dropping their guard over the coming weeks, out of “frustration or confusion”.

“We’re so close to being on the right side of this pandemic… The only cause of concern we would have, people just drop the guard over the next few weeks, whether it is out of frustration, confusion,” he said at a HSE briefing.

Asked about the event later on RTÉ’s Drivetime programme, he said: “It can cause confusion, it can cause distraction, it can cause a reaction… My call to everybody is please do everything we’re doing at the moment, we need a few weeks to work through the remaining vaccination process.”

The Government has meanwhile been accused of retrospectively interpreting regulations on outdoor gatherings to reduce political pressure over the event in the Merrion Hotel.

The controversy over Ms Zappone’s appointment as special envoy also looks set to continue into the new Dáil term, after she stood down from the role this week.

Members of the Oireachtas Committee on Foreign Affairs have renewed their calls for Minister for Foreign Affairs Simon Coveney to appear in September to answer questions about the role.