RECOGNITION for her excellent recent form has come for Kylie Murphy in the shape of the SSE Airtricity Women’s National League Player of the Month Award for June / July 2021. 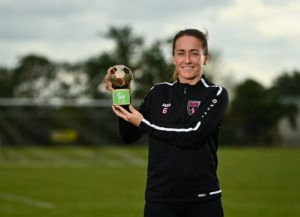 Kylie Murphy of Wexford Youths with her SSE Airtricity Women’s National League Player of the Month award for June/July at Killeshin FC in Killeshin, Laois. Photo by Eóin Noonan/Sportsfile

The Wexford Youths captain has kept her team in the title race – just behind Peamount United and Shelbourne – with a return of four goals in six games over the last two months, all of which they won.

Summertime has been kind to Murphy with the dynamic midfielder picking up Player of the Month awards in July 2018 and June 2017. But she is not one to hog the spotlight – even when she fully deserves it.

Even in explaining her recent form, which has coincided with playing in a more advanced position, Murphy insists it doesn’t really matter who scores the goals for her team.

“I’m really enjoying being in the box a lot more, I’d like to be scoring a lot more goals…I’ve had some chances and unfortunately not put them away, but it’s really exciting to be playing that bit higher up,” said Murphy, who hails from Graigecullen.

“I feel like every player should have that responsibility to get the team over the line. It doesn’t matter who is scoring. Am I happy that I’m scoring? Absolutely. But once they’re going in it makes no odds to me and once the goals are going in and we’re putting points on the board.”

Murphy has been involved in the Women’s National League since its inaugural season in 2011 and she has seen a lot of positive changes of late, particularly with SSE Airtricity taking over as title sponsor.

She said: “It’s been great since SSE Airtricity took over, to have an elite sponsor like them is amazing and you can see the coverage of the women’s game is getting more and more every year.”

“It’s been inspiring to see the leadership Kylie has shown as she has captained her side to six wins on the bounce while also scoring four goals. We’ve seen the impact that Kylie has had on her team and Wexford Youths’ excellent recent run of form and we’re delighted to name her our Player of the Month for June & July.

“As proud sponsor of the League this season, we’re thrilled to see the return of spectators in recent weeks and are looking ahead to what’s sure to be a very exciting end to the season with three teams so close at the top! We can’t wait to attend more games again as the season continues and see how it all unfolds.”

Murphy was selected ahead of her team-mate Ciara Rossiter and Shelbourne midfielder Ciara Grant in the top three from the voting process.