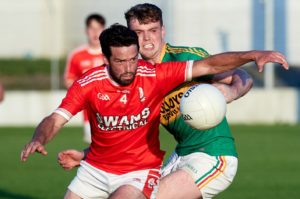 Rathvilly came out on top when they played Éire Óg in the recent Division 1 final and the teams meet again on Sunday in the SFC final at 6.30pm in Netwatch Cullen Park.
Photo: michaelorourkephotography.ie

IF Éire Óg are worried about two less than convincing performances in recent weeks then they are not showing it. In the league final Rathvilly beat them by three points while in the first half of the 2020 senior football championship semi-final against Mount Leinster Rangers on Sunday they seemed to be struggling. Selector, Bryan Carbery, shrugged off any suggestions the team is not firing.

“We knew it was going to be physical coming in to that match. Mount Leinster Rangers will always be physical and especially the year that was in it we haven’t had too many matches. Any matches that are going are always going to be a test. The lads came through it fairly well. The first half there was a nervousness. There were parts of the game where we need to improve on. I thought fitness told in the end and we came through, he said.

He did concede the loss to Sunday’s final opponents in the league decider was disappointing.

“Rathvilly was an eye-opener. They always give us a tough game. They never go away. We are started well in that game but we are finding it hard to give 60 minutes of good quality football. That is the way football is.”

They swept aside the challenge of Rangers in the second half and it is the second half performance where Carbery suggests the platform will be built on for the 2020 county final.

“We got a response from that Rathvilly game. We have to bring it again next week. They are seasoned campaigners. Rathvilly are one team who never really fear us. There is never too much in the game. They never go away. They have experienced players, some new players coming in and they have county players as well. It should be a good game. We know the dangerous players they have and we have a week to prepare.”

The four-in-a-row beckons. The last time the Éire Óg seniors did this was back with the legendary 90s team.

“Every year you try to bring new lads to the squad. You don’t stay on top forever so we have to instil this into the lads. It is very hard to stay on top. Everyone is trying to knock you down. There is a good bunch of lads there. Some experienced, some less experienced.”

And is the four titles a target?

“We don’t really speak about it. It is probably something you look back on when your playing career is over. We need to win the championship and that is what we are focussing on,” proclaims Carbery.

Both Éire Óg and Rathvilly will be reaching for glory this evening
Photo:
michaelorourkephotography.ie

RATHVILLY manager, Pat Ryan, is not a well-known face in Carlow. It is hard to fathom that. After all he has enjoyed Leinster club final success with Portlaoise while he guided senior Ballyroan teams to county final successes in 1992 and 2006. In fact, he was manager of Ballyroan, who lost to Éire Óg in the delayed Leinster senior club final which went from 1992 into early the following year. Ironically the current Éire Óg manager, Joe Murphy, played on that great YI team.

“Éire Óg are a formidable side now and they were a formidable side then. In fairness the late Bobby Miller did a remarkable job with them. He was a great player and a great person. In truth Éire Óg should have won the All-Ireland in Croke Park that year. It just goes to show what Éire Óg can bring to the table,” Ryan acknowledges.

The current Rathvilly manager has the knack of getting the best out of the players he manages. They ground out a result against Palatine on Sunday but Ryan expects a different challenge against the champions.

“It is all to play for. Semi-finals are always difficult but we are into a final now. It think it is going to be a great spectacle, a great game. Éire Óg are a formidable side. They are the team that everyone wants to be. They are going for four-in-a-row which is some achievement.

“We are hungry, in another final and hopefully we take the opportunity with both hands.”

With the limited amount of games this year, Rathvilly seemed to be the team in form.

Class and talent permeates the side. Brendan Murphy, Brian Murphy, Alan Kelly and Ed Finnegan always knew (and still do) where the posts were. Add Darragh Murphy and Kevin Murphy to that group now. Rugby and soccer respectively were the pair’s their first loves at one stage. Maybe not now?

“I suppose the good thing is they have decided to play football full-time. That has been a major help. It is amazing what a year can do to a young man who makes a decision. Their decision was to play football and dedicate themselves to it. I think both those lads have a great future in football,” predicts Ryan.

And can they break the Éire Óg dominance?

“It is like anything. Styles make contests. Éire Óg and Rathvilly have mutual respect. They both play a good brand of football. It will be down to key players, it will be intriguing.”

The manager is fearful he is the one taking the credit for Rathvilly’s successes so far this year. He doesn’t want that.

“We are trying to do something different, bring something new and we are endeavouring to do that. With young energetic players coming through there is a lovely mix with some of our knowledgeable and experienced players. It is a nice place.”